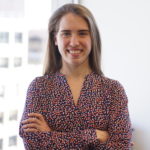 Caitlin Vogus is a senior staff attorney at the Reporters Committee for Freedom of the Press, where she focuses on the Reporters Committee's amicus brief practice.  Caitlin drafts or helps supervise the drafting of amicus briefs in state and federal courts on court access, public records, defamation, and other issues that affect the news media. Caitlin joined the Reporters Committee in 2015 as a Stanton Foundation Media Litigation Fellow. Prior to the Reporters Committee, she was an attorney advisor in the Consumer and Governmental Affairs Bureau of the Federal Communications Commission and served as a law clerk to the Honorable Rossie D. Alston, Jr. of the Virginia Court of Appeals. Caitlin received her bachelor's degree in American Studies from the University of Virginia, where she was executive editor of The Declaration, a weekly news and humor magazine. She earned her J.D. from Harvard Law School.

Admitted to practice in District of Columbia and Virginia.