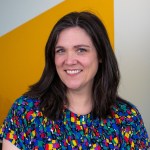 Ellen Osoinach joins the Reporters Committee as a seasoned attorney with more than nine years of civil litigation and six years of criminal law experience. She previously worked as a senior deputy city attorney for the City of Portland where she coordinated the legal work for the City’s public safety bureaus and was first chair for the City’s police reform litigation. She provided training and advice to city employees, including law enforcement, on a range of topics  such as public records and meetings law.

Ellen is a member of OGALLA, Oregon’s LGBTQi Bar Association, and has provided pro bono legal help to minors and their families seeking gender-conforming name changes. She previously chaired the Oregon State Bar Civil Rights Section where she coordinated a town hall on gentrification which remains some of the most widely viewed public content on the Bar’s website.

Ellen received her J.D. from the Lewis & Clark Law School, where she has also taught as an adjunct professor. She earned her Bachelor of Arts from Rhodes College.

She has received the Robert E. Jones Award for Achievement in Trial Advocacy and the International Trial Lawyers Association Award.

Admitted to practice in Oregon and the Ninth Circuit.