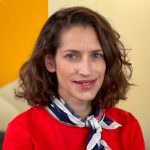 Flavie comes from the Thomson Reuters Foundation where she oversaw the global pro bono service, TrustLaw, in North America and the Caribbean, for three years. There, in addition to managing the brokerage service's core activities, she focused on the Foundation's media freedom related activities and collaborated with key players such as CPJ, Media Defence and UNESCO.

Prior to joining the Thomson Reuters Foundation, Flavie worked in London for Advocates for International Development (“A4ID”), a UK charity that empowers lawyers to eradicate poverty, as the Deputy Head of Partnerships and Legal Services. In this role, Flavie managed the network of non-profits and social enterprises and assisted them in better understanding and prioritising their legal needs. Flavie worked extensively in collaboration with several UN agencies, especially through the lens of the Sustainable Development Goals. Flavie also gained experience in Geneva where she worked for International Social Service, a non-profit dedicated to the promotion of children’s rights in the context of international adoption. She co-authored and published a study on child trafficking in the realm of international adoption. Before that, she worked as an immigration and family lawyer in France.

Flavie is a dual-qualified lawyer in France and England & Wales with an academic background in international human rights. She speaks French, English and Spanish.