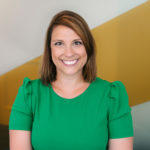 As the communications director for the Reporters Committee for Freedom of the Press, Jenn oversees the development and execution of local, national and international communications strategies to advance the organization's mission to provide free legal services for journalists, and increase awareness and use of its resources.

In her role, Jenn manages a team of five, and also leads key long-term strategic initiatives, including a website redesign, a five-year strategic plan, and a public engagement campaign. She speaks regularly with students and journalists on press freedom and journalism.

Prior to joining the Reporters Committee, Jenn was the communications director at the Sunlight Foundation, and managed media relations at Free Press. Before moving to Washington, D.C. she worked in the Civic and Nonprofit practice at Rubenstein Communications, a public relations firm based in New York.

Jenn holds a Bachelor’s degree in studio art, and a Master’s in Media and Communication studies with a concentration in political communication, both from Florida State University. While at FSU, she served as a sports editor and editor-in-chief of the independent student newspaper, the FSView and Florida Flambeau.

She resides in Washington, D.C. with her husband Ian, and their two-year-old Bernese mountain dog, Orville.