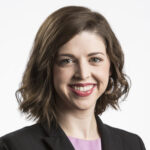 KatieBeth Gardner is a Local Legal Initiative staff attorney based in Oklahoma. She joins the Reporters Committee from Still She Rises in Tulsa, Oklahoma, the first holistic defense office in the country dedicated exclusively to the representation of mothers in both the criminal and civil legal systems. In her role at Still She Rises, KatieBeth used the Oklahoma Open Records Act to promote transparency and hold government actors accountable.

Before attending law school, KatieBeth worked in various roles across the nonprofit sector and launched a nonprofit organization, Aspiring Americans, to help connect Oklahoma's undocumented student population with opportunities for success. KatieBeth is a graduate of Leadership Tulsa and an active member of her community. The Tulsa County Bar Association named her the 2019-2020 Outstanding Young Lawyer in recognition of her reputation as a lawyer and dedicated service to the profession and community.

Admitted to practice in Oklahoma.