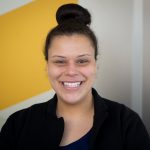 Melissa Wasser is a Policy Analyst at the Reporters Committee for Freedom of the Press.

Prior to joining the Reporters Committee, Melissa worked as the Law Fellow for the American Constitution Society. An Ohio native, she graduated from The Ohio State University in 2017, earning both her J.D. from the Moritz College of Law and her M.A. in Public Policy and Management from the John Glenn College of Public Affairs. During law school, Melissa served as Technology Editor for the Ohio State Law Journal, worked as a legal extern to the Ohio House Democratic Caucus in the Ohio House of Representatives, and served as the president of the Ohio State ACS chapter. She is a recipient of the Michael E. Moritz Leadership Award in Law.