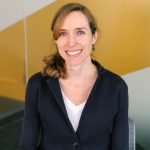 Sarah Matthews is a senior staff attorney with the Reporters Committee for Freedom of the Press, where she litigates cases, drafts amicus briefs, leads our pre-publication/pre-broadcast review practice, and oversees the publication of and updates to the Reporters Committee's legal guides. She also supervises the Reporters Committee's hotline for journalists and serves on the advisory boards of the U.S. Press Freedom Tracker and the Red Press Initiative. In addition, Sarah provides intake support to First Look Media's Press Freedom Defense Fund. She served as senior advisor for Freedom House’s Freedom in the World 2021 U.S. report and has taught communications law to college students at American University.

Before joining the Reporters Committee, Sarah was associate principal counsel at The Walt Disney Company. Prior to that, she was a litigation associate at Gibson, Dunn & Crutcher, LLP, where she focused on First Amendment, media law, and entertainment cases and represented the Reporters Committee on a pro bono basis. Before joining Gibson Dunn, Sarah clerked for the Honorable Renée Marie Bumb on the U.S. District Court for the District of New Jersey.

Admitted to practice in California, New York, and Washington D.C.