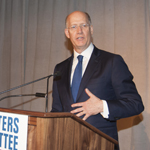 And thanks to Executive Director Bruce Brown and the entire Reporters Committee organization for the hard work that made tonight possible.

It has been an honor to serve as co-chair of this dinner along with a real hero to many people here, the great Don Graham. Don will speak later in the program.

I have been asked to comment on the state of the First Amendment. That is a bit more of a responsibility than simply serving as co-chair of this distinguished gathering. To get ready,  I thought I should draw on my experiences as President Clinton’s communications director and speechwriter back in the White House, helping him with his State of the Union Addresses. But, don’t worry. I promise my remarks will be considerably shorter than his were back then — and not just because I won’t need to pause for standing ovations.

One reason helping with this dinner is such an honor is because the ideal and the reality of the First Amendment have mattered directly in my own career over the years — as a junior media lawyer, a journalist, a White House official, a media executive, a communications professional (yes, it has been a long career). And, of course, always as an enthusiastic news consumer who shares the belief in the importance of the free expression of ideas.

On a personal note for one moment: My career started when I was a young lawyer here in New York City.  More than anything, I wanted to be what we self-importantly called “a First Amendment Lawyer.” And I found a great way to do that at a firm then in 30 Rockefeller Plaza called Patterson, Belknap Webb & Tyler. Before I left law practice after all of three years, five months and three days, I worked on clients that included some of the most well-respected news organizations in the world, such as The Wall Street Journal, The New York Daily News and ABC News. That was work we were all proud of.

One other thing that made me proud was helping on a book with the snappy title: “Sack on Defamation, Libel, Slander and Related Problems.” I specialized in the “related problems.” The person who was the foundation of Patterson Belknap’s First Amendment and Libel law work is the “Sack” of that title. And, as it happens — 34 years after a bunch of us first helped on that book — he is here tonight. To me, he was a mentor and friend way back then. And, over the years, you have all known him as one of the First Amendment’s most important friends ever.

So I want to say “thank you” to Bob Sack, now the imminent, in fact revered, Judge Robert Sack of the U.S. Court of Appeals for the Second Circuit. Thank you Judge Sack for giving a young lawyer a chance. And, more important, thank you for everything you have done for the First Amendment.

One of the things we believed in the 1980s that I choose to believe to this day is that the foundations of freedom of speech and freedom of the press are still strong in America.

At the same time, we all know that these freedoms face stronger challenges every day.

All of you know all too well, we face severe economic challenges — business model challenges — supporting the kind of journalism required for freedom of the press to matter. We face new and different kinds of threats to freedom from our governments, brought on by unexpected circumstances in our global affairs but also made easier by new technologies.

Indeed, reports from international press groups are now listing the United States as a nation in which press freedom is getting worse. They have said our country, once the most important defender of democracy and civil liberties, is now setting a bad example for press freedom.

I deeply hope that is not true. And I want to believe that the United States remains the strongest defender in the world of these essential freedoms.

Making sure that belief remains grounded in reality is one of the reasons we are all here tonight, celebrating the examples of our honorees and supporting the Reporters Committee for the Freedom of the Press.

Threats to our free press have been around a lot longer than 1970, when a group of journalists and lawyers formed the Reporters Committee to stand up to government subpoenas.

And, in part, because of the sustained, often courageous work of this group and despite many challenges to press freedom over the years, our principles and our practices of openness, of searching for the truth, of freedom do, indeed, remain strong.

Many of you share in the credit for all of that. As do our honorees tonight — Sharon Percy Rockefeller, Carol Rosenberg, Bruce Sanford and Arthur Sulzberger Jr.

From stewarding the production and distribution of groundbreaking documentaries and news productions, to fighting for access to military terrorism tribunals at Guantanamo Bay, from ensuring our legal system continues to protect the First Amendment, to guiding  the continuation and strengthening of one of the world’s greatest journalism organizations:  Our honorees  tonight have worked very hard every day for many years to make sure we all can speak and write and make available to the world the  ideas and information that help ensure all of our other freedoms — without fear of paralyzing intimidation or censorship.

These four honorees have made a difference in our lives. Through their defense of our freedom and their dedication to using that freedom for higher purposes, they have made us all better citizens, and they have made our lives better.  For that and for much more, we honor them. And thank each of them for devoting a life’s work to our lives, to our country and to our world.

And, now, to begin what we came here to do, it is my great pleasure to introduce the presenter of our first award — another of the greatest friends the First Amendment and journalism have ever known,my dear friend, Co-Anchor and Managing Editor of PBS NewsHour, Judy Woodruff.