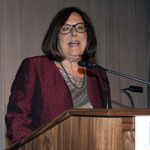 We stayed at Guantanamo because Knight Ridder, now McClatchy had the guts to keep reporting this extremely unpopular, frequently forgotten story.

I’ve been covering this story for a dozen years. Early on an Army general wrote my paper from Guantanamo: Would you please send another reporter? Carol Rosenberg, he wrote, knows more about the place than the latest batch of troops.

I was creeping them out.

My boss wrote back that in a democracy it’s the newspaper — not the military that decides who to dispatch to a story. I could not have been prouder.

Let me tell you what it’s like reporting at Guantanamo:

● I’ve been there since day one and no reporter has been allowed to interview a detainee.

● It’s a place where the military’s censorship authority means troops can delete a picture I take of a soldier’s face; but an Army photographer can post on Flickr the same face from the same place.

● It’s a place where my media center phone has a sticker that says I consent to monitoring.

● Where a soldier sits behind me in the press room watching me write my stories when court is in session.

● It’s a place where critics in American uniforms call it un-American because they’re still arguing at the war court over which portions of the Constitution apply.

● Where the war court has a motto: Fairness, Transparency, Justice.

As they close the hearings and seal up the filings and soldiers sit behind me watching me work, the motto comes to mock me.

I didn’t understand why exactly. Then Eugene Fidell explained it: If you’re really fair, really transparent, really just you wouldn’t need a motto.

It would be, as the founders said, self-­evident.

Now, there are times when the military wants to be left alone down there without what Gen. John Kelly at the Southern Command calls the microscope of scrutiny.

But not every officer and not every soldier wants to throw me out, to gag and censor the media.

Even when they don’t like what I write. Because those men seemed to see it as America’s Prison, America’s court. People like Generals Lehnert and Speer and Martins and Admirals Harris and Stavridis, tolerated me, respect reporters.

And it continues to this day with Todd Breasseale, the lieutenant colonel at the Pentagon responsible for helping media cover Guantanamo — and for whom I’m probably not doing any favors here by calling him an ally of press freedoms. He enables coverage, even stories he finds rather insulting.

Other allies in what I do are 9/11 and USS Cole families. They tell me their stories. They become my sources. And they consume my coverage: the tweets, the articles, the interviews because, again, like or hate what I write they want to know what’s going on down there.

Reporters got to Guantanamo years before the lawyers. We got there before the Red Cross. Then the Supreme Court let in the habeas counsel and the men in the orange jumpsuits got someone to speak for them.

David Remes talked about a guy so messed up he’d eat shards of metal, spill his own blood… So when Adnan Latif, cleared to go home for years but blocked because he was Yemeni, died of a drug overdose in his cell two Septembers ago, he was not an abstraction. He was a tragedy.

But life really changed for me when I got a lawyer, Dave Schulz. He got me back in when I was banned for life in 2010 by systematically, relentlessly delivering an incredibly powerful message to the Pentagon: The Constitution does apply to the reporters.

He and his firm helped me sue – and win – with FOIA.

I have covered this story through a frankly awful era of downsizing, of introspection and of entrenchment of the daily newspaper industry.

But the Miami Herald and McClatchy believe in this story. People like Pat Talamantes in Sacramento and Dave Schulz in New York and chief of correspondents Mark Seibel in Washington and senior editor Dave Wilson in Miami have gone to bat for me and my beat.

No matter how unpopular the story.

No matter how unpopular it made me.

This is especially true now when at Southcom General Kelly has used his authority to issue gag orders and other restrictions on the flow of daily news from that prison. He sealed up the hunger strike figures after months of daily disclosure and now soldiers at Guantanamo call them classified.

So thank you. For this is a true and timely honor.