More than 100,000 people, including 20 Pulitzer Prize winners, signed a petition submitted to President Obama and Attorney General Eric Holder today urging the administration to rethink its policy of subpoenaing journalists to reveal their sources.

Seven representatives of free press organizations announced the delivery of the petition at the National Press Club this afternoon and called on the administration to drop its threatened subpoena of New York Times reporter James Risen.

Risen has been fighting since 2007 to protect a confidential source he used in writing a book about the Central Intelligence Agency, and he joined the panel at the press conference today.

“The events today are part of a very strongly accelerated effort across this country to lance a boil of fear and intimidation,” said Norman Solomon, whose Institute for Public Accuracy and RootsAction.org started the petition.

“Freedom of the Press is the most important freedom,” said Delphine Halgand, the director of Reporters Without Borders’ Washington office. “It is the freedom that allows us to verify the existence of all other freedoms.”

Risen said the level of support the petition generated “leaves me speechless.”

“I also know that it’s really not about me. It’s about some basic issues that affect all Americans and all journalists,” Risen said. “I’m willing to do this for the future of journalism . . . There’s no way to conduct aggressive investigative reporting without confidential sources.”

Panelists emphasized the importance of official government action beyond the promise Holder made this summer that no reporter will go to jail for doing his or her job. That could be little reassurance for Risen, as in the past, journalists have been ordered to pay between $500 and $5,000 a day if they refuse to name their sources.

“Ultimately threats like these from the federal government must be addressed by the enactment of a meaningful shield law,” RCFP Legal Defense Director Gregg Leslie said, referencing the shield law currently pending in the Senate. He added that this type of petition provides an important show of public support for the effort. “This is the kind of thing that will prompt action . . . It has to be reporters continuing to do good work and have the public stand up for that.”

Courtney Radsch, advocacy director for the Committee to Protect Journalists, said the U.S. government should be standing up for press freedoms, rather than joining anti-democratic governments in jailing journalists.

“I don’t think we want to join Cuba as the only country in the Western Hemisphere to have a jailed journalist,” she said. CPJ currently counts 124 journalists jailed worldwide for crimes like espionage, which is the charge leveled against journalists and their sources here. “These types of prosecutions send a dangerous signal to governments elsewhere,” Radsch said.

The U.S. Court of Appeals in Richmond, Va. (4th Cir.) ruled in July 2013 that the government can compel Risen to name his source. Risen appealed that decision to the U.S. Supreme Court, but this June, the Court declined to take the case. Risen is now waiting for the Justice Department to decide whether to re-issue the subpoena for his testimony. 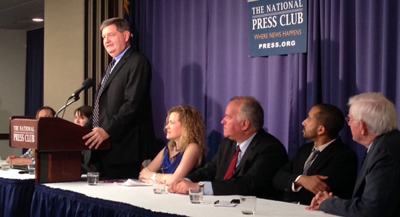