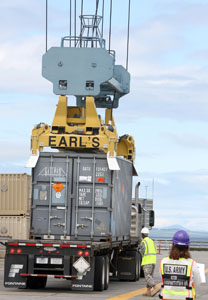 A container of ammunition is being picked up by a crane to load onto a ship at Naval Magazine Indian Island near Port Townsend, Wash. A FOIA request for information from the base led to the demise of the “High 2” exemption by a decision of the U.S. Supreme Court.

Even though Glen Milner won a major U.S. Supreme Court victory limiting the government’s ability to withhold non-classified but sensitive information under the federal Freedom of Information Act, the U.S. Navy never released all the records he was seeking.

Milner, a community activist who was the plaintiff in the Supreme Court’s March 2011 decision in Milner v. Department of Navy, spent more than eight years trying to get information on the potential blast zones of a military munitions storage facility in the Puget Sound area of Washington state to determine whether the surrounding community was in any danger should an explosion occur.

Yet even after the Court ruled in the case that the government could no longer withhold the documents under an expansive interpretation of Exemption 2 of FOIA, known at the time as the “High 2” Exemption, the impact of the decision remains unclear.

On one hand, Milner appears to have had a dramatic impact on federal agencies’ reliance on Exemption 2, as the number of times it was cited by agencies to withhold documents has fallen 69 percent since the 2009 federal fiscal year.

At the same time, it does not appear that the government is any more willing to release information that previously was shielded under High 2. In August 2011, the U.S. Department of Justice Office of Information Policy issued guidance that instructed federal agencies to use other potentially applicable exemptions under FOIA, such as those governing law enforcement records or records exempted from FOIA by other federal statutes, to withhold information that previously would have fallen under Exemption 2.

Additionally, Congress passed a law in direct response to Milner that allows the U.S. Department of Defense to withhold “critical infrastructure security information.” The maps Milner had sought all along were labeled as such by the military and were never released. This led Milner to close his case this fall when, after it was remanded to the trial court, the Navy released a handful of other documents and agreed to pay him more than $75,000 in attorneys’ fees.

Although David Mann, Milner’s attorney, views the case as a victory, he said questions remain regarding how agencies will apply old exemptions to withhold information and how the Defense Department will use its new statutory exemption under FOIA.

“I’d like to see how the statute is applied in the long run,” he said. “At this point, we don’t really have a good handle on it.”

Before the Supreme Court’s decision in Milner, courts had interpreted the language of Exemption 2 — which exempts from disclosure documents “related solely to the internal personnel rules and practices of an agency” — broadly.

Under Crooker v. ATF, a 1981 decision by the U.S. Court of Appeals in Washington (D.C. Cir.), federal agencies were able to withhold both personnel documents and internal documents if “disclosure significantly risks circumvention of agency regulations or statutes.”

The decision created a split in the application of Exemption 2 known as “Low 2” and “High 2.” Low 2 was the exemption used to withhold internal personnel information such as human resources documents, while High 2 was used for internal documents such as records disclosing the location of nesting sites of endangered birds or the maps at issue in Milner’s case.

The decision has been criticized because it significantly broadened the type of information federal agencies could withhold under Exemption 2.

The broad nature of High 2 was one of the reasons Milner decided to take his case to the Supreme Court after the Navy refused to release detailed maps of potential blast zones at Naval Magazine Indian Island.

“I think the High 2 was becoming so broad, it would almost be impossible to argue against,” Milner said. “It eventually would expand to the point where it would destroy FOIA.”

In Milner, the Navy argued it could withhold information under High 2 because if the information were released, it could lead individuals to exploit weaknesses in the ammunition depot’s design and endanger the surrounding community.

Writing for the majority, Justice Elena Kagan said that the plain language of Exemption 2 demonstrated that the exemption restricted only the disclosure of internal personnel policies and related documents and not documents that created a potential risk of law breaking.

“Our construction of the statutory language simply makes clear that Low 2 is all of 2 (and that High 2 is not 2 at all),” Kagan said.

In narrowing the scope of documents that could be withheld under Exemption 2, the Supreme Court rejected arguments by the government that it would be left without a justification for withholding documents that it believed could lead to crimes in the future.

Instead, Kagan said, agencies could rely on other exemptions or even seek a statutory exemption from Congress.

“All we hold today is that Congress has not enacted the FOIA exemption the Government desires,” she said. “We leave to Congress, as is appropriate, the question whether it should do so.”

After the Supreme Court’s decision in Milner, the case was sent back to the trial court. There, the Navy sought to withhold the maps on alternative grounds, arguing that the information was exempt under FOIA Exemption 7(F), which covers law enforcement records that, if released, could “endanger the life or physical safety of any individual.”

As the court was determining whether to release the maps under 7(F), in December 2011, Congress passed the National Defense Authorization Act for Fiscal Year 2012 (NDAA), a provision of which authorized the Department of Defense to withhold documents containing “critical infrastructure security information” under Exemption 3 of FOIA.

Exemption 3 allows agencies to withhold information that is specifically exempted from disclosure under FOIA by another statute.

Once the law was passed, the trial court indicated that it would likely rule that the records could be withheld. Milner and the Navy then agreed to settle and dismiss the case.

The provision of the NDAA used to withhold the maps at issue in Milner requires that the secretary of defense or the department’s director of administration and management make a written determination that information requested under FOIA is in fact critical infrastructure security information.

The statute also requires that each time the department determines that information requested under FOIA is critical infrastructure security information, it must make the decision to withhold the document in writing and available to the public.

To date, the only determination by the department was in the Milner case, where the Defense Department determined this past June that the information would not be released under the statute.

In reviewing the maps at issue in Milner, Director of Administration and Management Michael L. Rhodes wrote that releasing the documents “would likely enable an adversary to identify and possibly exploit vulnerabilities of the weapons storage facilities at Naval Magazine Indian Island and cause significant disruption, destruction, or damage to these facilities.”

Rhodes wrote that although the public interest of residents who live near the naval facility was legitimate because they would be affected by an explosion or other incident, it did not outweigh the potential security risks if the information were released.

“The public interest in the disclosure is not insignificant in this instance; however, the harm that would likely result from disclosure is very serious and much more significant,” Rhodes wrote in his June findings.

In August, the Department of Defense released the internal guidelines that establish the process by which the department determines whether information can be withheld under the statute.

Once a division of the department determines that the statute may exempt information requested under FOIA, it must provide a statement justifying its determination to the director of administration and management. The division must also provide a “thorough explanation of the harm that could reasonably result if the information is released.”

After the information is received, Rhodes’ office is required to contact the requester and ask him or her to provide a statement describing the public interest in releasing the document that the director will use to determine whether the documents will be released.

Finally, once the director reviews the documents and competing interests, his or her decision is made public along with the statements from the division and the requester.

Because the relevant portion of the NDAA applies only to the Department of Defense, other federal agencies were left trying to determine how they could withhold information officials believed was sensitive but could no longer be withheld under Exemption 2.

Although precise details regarding how agencies are using other FOIA exemptions to withhold documents that would have fallen under High 2 are difficult to ascertain, Exemption 2 use has dropped dramatically.

In an attempt to protect information agencies still deem sensitive, the Department of Justice’s Office of Information Policy issued guidance to agencies in August 2011 that details how agencies may use other exemptions as alternatives to Exemption 2.

The guidelines recommend that agencies take advantage of Exemption 7, which regulates the release of certain kinds of law enforcement records, including those that, if released, could lead to potential unlawful activity or endanger an individual’s safety.

The requirement that records have a law enforcement purpose “should be construed to encompass not only traditional law enforcement in the sense of investigating and prosecuting bad actors for crimes that have already occurred, but also preventative law enforcement and security, meaning the prevention of future illegal acts,” according to the guidelines.

The recommendations also state that other possible alternative exemptions include: Exemption 1, which covers classified material related to national security or foreign policy; Exemption 3, which allows information to be withheld if it is prohibited by another statute; and Exemption 4, which deals with commercial or financial information from an organization doing business with the government.

Finally, the guidelines state that agencies should consider making discretionary releases when considering withholding information that previously would have fallen under Exemption 2, in light of Attorney General Eric Holder’s call for increased FOIA disclosures.

Before Milner settled his case with the Navy, the agency released about 20 pages of additional documents as well as unredacted portions of records he previously had obtained.

The Navy also released a document detailing how it planned to deal with a ship that caught fire, Milner said. The document shows that in the event of a fire, the Navy would attempt to move the ship out into the water and scuttle it before it could explode.

Although Milner did not get the maps, the new information, coupled with publicly available maps of the munitions facility, allowed him to gain a better idea of the potential hazards the facility posed to the Puget Sound community.

Milner said he plans to present his findings to local government leaders — his initial goal in filing the FOIA request back in 2003.

“We got the information that we were ultimately looking for, we just didn’t get it in the format we wanted,” lawyer Mann said.

Milner said he is optimistic that the Supreme Court decision will lead to more transparency given that he has already seen some progress in another FOIA request he has pending with the Navy.

In that FOIA request, the Navy has already released more information than Milner believed it would, a fact he attributes to the narrowed scope of Exemption 2. Additionally, the Navy has informed him that it is undertaking the review process outlined in the statute governing the release of critical infrastructure security information.

And although the review process is taking several months, Milner believes that the statute is better than the broad exemption that previously existed under Exemption 2.