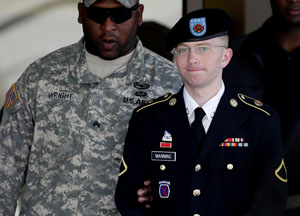 Army Pfc. Bradley Manning, right, is escorted out of a courthouse in Fort Meade, Md., on June 25, 2012, after a pre-trial hearing.

The prosecution of U.S. Army Pfc. Bradley Manning has garnered international attention, igniting a worldwide debate over several contentious issues such as national security, the treatment of military service members and the role of journalism and whistleblowing in a digital society.

But despite the profound issues at stake in the case involving the largest leak of classified information in U.S. history, the military court system routinely has kept transcripts, motions, briefs, orders and other documents under seal. Although hearings in the court-martial of Manning — who was arrested in May 2010 in Iraq for allegedly disclosing thousands of classified military documents to the website WikiLeaks — generally have been open to the public, numerous news organizations and media advocates have argued that an open courtroom means little without access to the relevant records.

“This secrecy extends even to the court’s docket, meaning that journalists covering the proceeding are often unaware of what is being discussed therein,” a coalition of nearly 50 national and local news organizations and associations led by The Reporters Committee for Freedom of the Press wrote in March in a letter to U.S. Department of Defense officials, as well as the presiding judge and lawyers involved in the prosecution. “The U.S. Supreme Court and the nation’s highest military courts have said the American press and public have a First Amendment right of access to criminal proceedings. But by refusing to provide reasonable and proper notice of such proceedings and the nature of the documents filed in connection therewith, the military justice system has severely undercut this foundational tenet of American democracy.”

The New York-based Center for Constitutional Rights (CCR) represents several journalists and WikiLeaks founder Julian Assange who intervened in the case to request that the documents be unsealed, but both the presiding trial judge and the military’s intermediate appellate court denied the requests. The group appealed the denials to the country’s highest military court, which heard oral arguments in the case last month. The Reporters Committee, joined by 31 news media organizations, filed a friend-of-the-court brief in support of CCR’s unsealing request.

Although the hour-long arguments before the U.S. Court of Appeals for the Armed Forces in Washington did address the merits of the case, the five-judge panel questioned whether it even has jurisdiction to address the underlying issue. The Uniform Code of Military Justice, the compilation of rules that govern U.S. military law, states that the system’s highest court may hear appeals from the intermediate military appellate court only on request of a party or if the death penalty is involved. The code does not address appeals from parties trying to intervene. For that reason, the court asked both sides to submit extra briefs addressing whether it has the authority to resolve the dispute.

Both parties submitted the additional documents in late October. The court did not indicate when it would issue its ruling, which could reject CCR’s request on procedural grounds or establish a right of public access to records filed in military courts-martial akin to the well-established access right that the First Amendment provides to criminal documents filed in civilian courts.

CCR has maintained that the pervasive secrecy underlying Manning’s prosecution, particularly the inability to view the documents at issue in a particular hearing, has “made it exceedingly difficult for credentialed reporters to cover the proceedings consistent with their journalistic standards and obligations.”

“It’s not like they’re speaking a foreign language in court,” Army Capt. Chad M. Fisher, who represented the government, said during the oral arguments in response to that claim.

Fisher argued that because court-martial documents belong to the JAG and thus are not judicial documents, the federal Freedom of Information Act is the only means by which the public may view them — an assertion some of the civilian judges seemed to doubt.

“Has Congress decided that [FOIA] is the exclusive process?” Judge Margaret A. Ryan asked. “Has Congress said you cannot make a brief with unclassified information affirmatively available?”

Taking a cue from the court’s skepticism of Fisher’s contention that a military judge does not have custody and control of the documents filed in his or her courtroom, Shayana Kadidal, CCR’s lawyer, emphasized that FOIA is an ineffective means of obtaining records filed in Manning’s court-martial, noting that such requests by members of the news media have been denied.

In addition, “FOIA has exemptions. The First Amendment does not,” Kadidal said after the hearing. He had conceded during earlier questioning by the judges that this constitutional public access right is a qualified one that can be overcome by a showing that sealing is necessary to serve a compelling government interest and that the sealing order is narrowly tailored to serve that interest.

Rather than the blanket closure that the courts effectively have operated under in the Manning case, CCR has requested that military trial judges give notice to the public regarding potential court closures or sealing of documents, allow an opportunity for interested parties to be heard and justify any restrictions on access with case-by-case specific findings.

If certain documents or parts of a proceeding do tip the balance toward secrecy, the group also has advocated that those particular items be handled with less restrictive means than complete closure and secrecy.

Kadidal said he hopes the sealing issue will be resolved before the scheduled start of Manning’s trial in February. If not, those seeking access to the documents will take their case to the federal civilian court system and perhaps request a stay of the proceeding until that court has ruled on the matter, he added.