Journalists armed with pens, paper, cameras and even helmets flocked to Chicago in May to cover the NATO summit, where President Barack Obama met with world leaders.

Among the masses outside McCormick Place were reporters whose main purpose there was not to cover the summit, but to use the event as a practice run for covering the upcoming political party conventions. Police officers from the convention cities of Tampa, Fla., and Charlotte, N.C., also traveled to Chicago to learn how to handle a high-profile event. 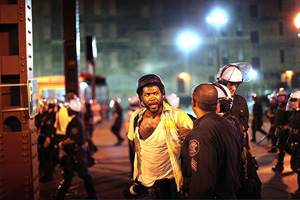 Getty freelance photographer Joshua Lott was arrested while covering protests at the summit.

Robert Tufano with the Charlotte-Mecklenburg Police Department said the department sent about 100 of its officers to Chicago to observe how the local police interacted with the media. Likewise, Jim Morrill, political reporter with The Charlotte Observer, said some of his colleagues headed to Chicago to get an idea of the interactions between police and protesters at important political events. Morrill noted that many of the newspaper’s reporters are unfamiliar with covering such events.

Jim Walser, the paper’s senior editor for local news, said the one editor and two reporters returned from Chicago with lists of recommendations. The team spent time with The Chicago Tribune staff and “learned how to distinguish yourself as a reporter from crowds when the cops weigh in on demonstrators,” he said.

The last year was wrought with clashes between police and journalists covering protests, such as at Occupy demonstrations throughout the country. Just as concerning to media advocates is the fact that Illinois has one of the strictest laws when it comes to the First Amendment right to record police activity. For these reasons, news organizations used the event as a test run for the political conventions, and First Amendment advocates kept a close eye on Chicago police, although the city said it would not enforce the eavesdropping law at the summit.

According to news reports, Getty Images freelance photographer Joshua Lott is the only journalist known to have been arrested. Lott and Getty staff photographer Scott Olson were in Chicago on May 20, covering the NATO protests.

Lott was injured and arrested “while serving as a professional photojournalist for Getty Images,” public relations manager for Getty Images Jodi Einhorn said. He initially faced a felony charge of mob action, but the charge was reduced to reckless conduct. Lott was released at 4 a.m. on May 21, hours after his arrest. On June 26, Lott had a hearing before a Cook County judge. Einhorn said the case is still pending.

Olson was also injured during the protesters’ clashes with the police and suffered an injury to his head, Einhorn said. A number of news sites posted a photograph of Olson with blood dripping down the right side of his head. Melissa Stratton, director of news affairs for the Chicago Police Department, said there is no report about the incident on file and declined to provide further comment.

Independent journalist Tim Pool, along with four others covering the protest, were detained and interrogated after leaving the NATO summit protests, according to Pool who tweeted about the incident. Pool streams live footage of protests on UStream.com, and some of his past videos have been used as evidence in court cases.

Pool and his group were driving home when they were surrounded by police and then handcuffed while police searched their car. The exchange was recorded on the cell phone of another individual in the car before police confiscated the phone, stopped the recording and erased the footage, according to Pool.

Pool said police also took hard drives and batteries from the vehicle and banged the items against the doors, destroying the materials.

It was not until after the individuals were released from handcuffs that a supervisor told Pool they were being detained because their vehicle matched the description of a car that police were searching for, Pool said. Stratton said there is no report on file and declined to provide further comment on the incident.

Despite the one journalist arrested, Stratton said that the Chicago Police Department “is very pleased with its media coordination before, during and after the NATO summit.”

According to Stratton, the department had on-going conversations with the media leading up to the summit. She said the department held a media training session in April for the command staff and supervisors to address their concerns over media coverage, and local media outlets were invited to attend as well. The department also held daily round-up press conferences during the summit to give updates and timely information about events of the day.

Her biggest advice for the department’s counterparts in Tampa and Charlotte: maintain open lines of communication between journalists and law enforcement.

Tampa Police Department’s spokesperson Laura McElroy flew to Chicago to learn from the security at the summit.

She said the convention security in Tampa will be run the same way as Chicago: Local law enforcement will handle security outside of the convention center and the U.S. Secret Service will be in charge inside.

“They also sat down and met with the media before the event and that seemed to be very effective for them,” she said. “We have taken the same steps.”