If social media was a kid, she would still be in elementary school. But in the last couple of years, social media has become a very necessary newsgathering tool for journalists. Managing editor Nicole Lozare chatted with media lawyer Ashley Messenger about social media issues. She regularly advises reporters at National Public Radio, where she has served as associate general counsel for two years, on social media issues. 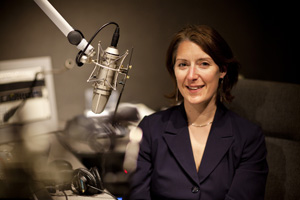 Ashley Messenger is the associate general counsel at National Public Radio where she is responsible for issues such as libel, privacy and newsgathering issues.

At the public broadcasting news organization,  Messenger is responsible for First Amendment issues such as libel, privacy, subpoenas and newsgathering issues. Messenger was also a former McCormick Tribune fellow at The Reporters Committee for Freedom of the Press.

If someone is under 18, but his/her Twitter and Facebook accounts are public, can I use that information in a story?

Set aside for a moment the issue of the person’s age. The first question should be what do you want to use and why? Is it newsworthy? What is the context? Are there libel or privacy issues? Copyright issues? If any potential issues might arise from your use of the material, you might want to consult with your lawyer to evaluate the risk. Now, adding in the fact that the poster is a minor, you might be extra sensitive about any potential privacy issues, and if you need consent for something (for example, to use material that may be copyrightable), you will need to get consent from the parents, because a minor cannot give valid consent. But there is nothing magic about being under 18 that automatically transforms the material into being off-limits.

Again, the first question should be what you are using and why. Photos, tweets and other materials that might be posted may be copyrightable, and the ordinary rules of copyright law may apply. Your use might qualify as a “fair use,” in which case you would not need permission; but on the other hand, your use might be one that requires permission. It would be impossible to say without knowing what the exact use is. The important point, though, is that the fact that the account is “public” is not determinative. You might also look at the terms of service (which change with some regularity, it seems) to see what the terms require of you. Courts have held that a website’s terms of service can operate as a contract to which you may be bound. It is also worth noting that other social media sites may offer alternative means of using posted material. Flickr and Wikimedia offer material under Creative Commons licenses, which means you can use the material as long as you adhere to the terms set by the poster (and you should understand what those mean!), and some sites offer material via embed codes.

If someone’s Facebook or Twitter is private, but his/her “friend” shows me the content, can I quote from it? Would I get in trouble if that friend offered me access to the private account and I used the information in a story?

The answer to this is a bit tricky, because it would depend a lot on how or why you are “shown” the material, and of course, there is always the question of how you want to use it. But let’s start with a simple fact: even “private” Facebook and Twitter accounts aren’t truly private: even if the person posting the material makes it available only to certain friends, it is possible for the friend to share, retweet, cut and paste, print, take a screen shot, or do any number of other things with it that may make the material available to others, all of which may be perfectly legal for both the sharer and the recipient. So, again, the question becomes whether your particular use creates issues. You have to separately think about whether your use creates libel, privacy or copyright issues, even if no legal issues are created merely by seeing the material. But back to the question about access to the account: you definitely want to avoid anything that would constitute hacking, fraud or other illegal conduct. The Computer Fraud and Abuse Act potentially applies to improperly accessed material, for example, and other laws may apply, too. You should consult with your lawyer before doing anything that involves using passwords, codes, or otherwise provides access to protected sites.

That is an excellent question. If you don’t already know the answer, then neither do I.

I’m only partly joking in my response. There are a couple of cases on this very topic pending. The opinions so far seem to indicate that the outcomes will be very fact-specific. What representations were made? Does the employee handbook contain relevant terms? Is there an agreement between the parties? What uses were permitted — or required — during employment? Thus, there is no clear-cut answer. Employers or employees who are concerned about this issue should attempt to spell out an agreement clearly at the outset so that problems don’t arise later.

Should I have the same Twitter handle for my personal and professional use (as a reporter)?

This really depends on ethical and business considerations more than legal ones. Does your employer want to own your professional account? Then you might want a separate personal one. Do you want to tweet about topics that might seem unprofessional? Keep two accounts. Or rethink the wisdom of those tweets. However, some may find it easier and preferable to maintain one account. Either way. But if you are concerned with ownership of the account, make a clear deal with your employer before you rely on a presumption that you own it.

Can I libel someone on Twitter or Facebook? If I delete it right away, does it count?

Yes. Libel does not depend on the medium used. And, immediate deletion does not take away the libel, although it might make the claim more difficult to prove and would minimize damages.

More of an ethical question, but do I have to be careful who I follow on Twitter in case it shows bias? Likewise, if a source wants to friend me on Facebook and I accept, is that seen as bias?

Whether it is *seen* as bias is a different issue than whether it truly indicates bias. I think that most people who actually use Twitter understand that following someone means only that you have some reason to follow them; it says nothing about approval, disapproval or any other motive or mindset. Similarly, being a “friend” or “connection” on Facebook or LinkedIn doesn’t have an inherent meaning. Some people only connect to truly close friends, and others will accept any friend request. If a critic wishes to create a scandal out of nothing more than a social media connection, I would think that effort would reflect more poorly on the critic’s lack of critical thinking skills than it does on the reporter. That said, you should still be careful. There are thorny ethical issues involved. It may be wise to avoid connecting with a source if it would reveal the fact that someone was your source. Or, if you are covering a trial, do not friend the judge or a juror during that trial. (You particularly want to avoid any appearance of jury tampering.) And, you might be wary of creating an appearance of a conflict by friending the subject of a story. But all these determinations have to be made on a case by case basis, and you should probably consult with an editor or journalism ethics expert if you find yourself in a delicate situation.

Do not assume that any random person you contact will know that you are a reporter. Even if you think it’s obvious. People can be oblivious. The principles of journalism ethics typically require that a reporter identify him/herself as such, and that’s a valid principle regardless of the medium in which you are operating.

I have to admit, I’m not entirely certain what scenario this question is premised upon. But I guess I would say that you probably would have as much responsibility to verify that as you would any other fact you are reporting.

Is there anything else that you think journalists should understand about Twitter and Facebook and using social media professionally?

The main takeaway should be that social media is not really different from any other method of communication. The same legal issues arise, the same principles apply.