In 2004, Jack Ryan, a successful investment banker, was the Republican nominee in a close race for a U.S. Senate seat in Illinois, when two Chicago news media organizations successfully argued for the public disclosure of his previously sealed divorce records. Ryan opposed the records’ release and the ensuing revelation of a salacious sex scandal with his ex-wife derailed his campaign, paving the way for his opponent, a little-known Democrat from the Illinois State Senate, to win the November election by a landslide. 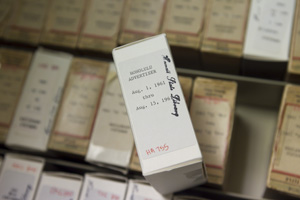 The microfilm has The Honolulu Advertiser birth announcement of President Barack Obama.

His name was Barack Obama.

Years later, as president, Obama of course became embattled with a private records controversy of his own, when Donald Trump and other supporters of the ‘birther’ movement pressured him to release his long-form birth certificate to prove that he was born in the United States and is qualified for the presidency. Leading up to Obama’s securing of the Democratic party’s nomination for reelection in April, obstinate skeptics filed lawsuits in 13 states challenging his eligibility to be listed on the primary ballots unless he showed more proof of his natural-born U.S. citizenship.

Neither divorce records nor birth certificates of public officials fall under the scrutiny of campaign disclosure regulations, which exist to make elections and the candidates running for office more transparent. But public demand for their disclosure does reflect a trend at a time when voters — and, serving as their public advocate, the news media — judiciously scrutinize the perceived character of a candidate, suggesting that the private records of public figures have the potential to significantly influence a political career.

But how much of a politician’s private life does the public have a right to know?

The federal Freedom of Information Act and like-minded state open records laws make all records of federal and state agencies presumptively available upon request. But their corresponding exemptions act as safeguards against the release of records that could compromise, among other issues such as national security, the privacy of an implicated individual. The federal Privacy Act of 1974 also governs the dissemination of personal identifiers located in administrative records, enabling federal executive branch agencies to withhold certain personal information about individuals without their permission.

But mounting public interest has suggested that transparency and ethics regulations monitoring candidates running for public office should perhaps take into account certain personal records in their capacity to affect official government business.

“No one has to be a public figure,” said Melanie Sloan, executive director of Citizens for Responsibility and Ethics in Washington (CREW), an organization that advocates for greater government accountability. “You give up a certain amount of privacy to be one.”

In particular, information related to a political contender’s finances has always been of general public interest, but does not fall into the category of records that can be accessed under most transparency laws. But as the upcoming 2012 election nears, the secrecy that shrouds personal finances often draws attention to the still-unsolved quandary regarding the private records of public figures — an issue that is of importance to journalists, the aspiring politicians they cover and the citizens they hope to serve.

Recently, government transparency advocates and political opponents have called on Republican presidential candidate Mitt Romney to disclose more of his past income tax returns, in order to shed light on his offshore bank accounts, family trusts and working relationship with Bain Capital, a private equity firm that he founded.

But by releasing his 2010 returns and 2011 estimated taxes, “Governor Romney has dutifully and according to law filed all of his financial disclosure requirements,” said Romney aid Kevin Madden to host Bob Schieffer on CBS’ “Face the Nation” in July. “He’s gone above the law.”

Madden is right: under current government ethics statutes and Federal Election Commission regulations, Romney and other presidential candidates are under no legal obligation to release information related to their private tax history. The Internal Revenue Service protects the privacy of all citizens — including U.S. presidents — and is barred from releasing any taxpayer information to the public. But since the wave of political scandal that broke out in the 1970s, candidates running for public office have traditionally chosen to release their tax returns in an effort to appear transparent.

A Vanity Fair article published in August that exposed Romney’s offshore accounts in Bermuda and the Cayman Islands reported that it was actually the presidential candidate’s father who introduced the voluntary transparency precedent. George Romney released 12 years’ worth of his income tax returns just before the 1968 presidential election. According to the article’s author, British journalist and financial researcher Nicholas Shaxson, George Romney, then the governor of Michigan, said at the time that he released personal records that were up to a decade old because “one year could be a fluke, perhaps done for show.”

Only after securing his re-election did former President Nixon follow suit, releasing in 1973 copies of his wife’s and his joint federal income tax returns from 1969 to 1972, according to the Tax History Project, an organization that tracks the history of American taxation. The project’s online archive indicates that since then, presidential candidates have fluctuated in their level of voluntary financial transparency. Former presidential candidate Rick Santorum released four years of tax returns while Newt Gingrich, his opponent of the same political party, disclosed only his 2010 returns.

“I don’t think the public pays much attention to this stuff until there’s a controversy,” Sloan said.

While they do not have to release their income tax return information, presidential candidates are obligated to file public financial disclosure records. These releases are monitored by the U.S. Office of Government Ethics, an independent regulatory agency that exists to prevent conflicts of interest in the executive branch and maintain public confidence in the integrity of government decision-making, according to its website.

“The opportunities presented by government service come with responsibilities,” states the introduction to the online version of the ethics agency’s “Nominee and New Entrant” form that various political appointees from the executive, legislative and judicial branches must fill out. It requires filers to report assets and incomes for themselves, their spouses and their dependent children. “Transparency is a critical part of government ethics, and Congress has determined that the citizens should know their leaders’ financial interests,” according to the form.

The office was established to help with the enforcement of the Ethics in Government Act of 1978, a federal transparency statute that was passed in the aftermath of the Watergate scandal’s Saturday Night Massacre. Although a legislative act, the ethics law allows the Attorney General of the United States to investigate and bring charges against anyone who falsifies information in the reports through an executive mandate that has been criticized for muddling the traditional separation of powers.

Under the act, individuals who declare their candidacy for president must also submit public financial disclosure reports to the Federal Election Commission, which shares them with the Office of Government Ethics. The ethics agency then in turn reviews the disclosures’ veracity before posting the information online.

But loopholes do exist, according to Sloan’s watchdog organization, CREW, which sent a letter to the Office of Government Ethics in January, calling for an investigation into alleged discrepancies between Mitt Romney’s tax returns that were released on his own accord and financial disclosures that he filed with the Federal Election Commission. CREW requested that Romney be referred to the U.S. Department of Justice.

In an article published in April in The Washington Post, reporter Tom Hamburger noted that recently, the Office of Government and Ethics has occasionally allowed presidential candidates to delay revealing certain assets in investment accounts until after being elected to office if they are legally bound by a confidentiality agreement. According to The Post, that standard was set during the 2004 presidential election, when Democratic candidate John Kerry withheld some aspects of his wife’s finances, and likely explains Romney’s reported discrepancies, because Bain, the private equity firm he founded, often arranges such confidentiality agreements.

In an interview, she said that overall, people running for public office do not enjoy the same legal protections on their personal lives as do private citizens.