After decades on the air, his was a voice that needed no introduction. Yet every newscast began the same way: “This is All Things Considered. I’m Robert Siegel.”

As National Public Radio’s senior host for the nation’s most-listened-to, afternoon-drive-time news radio program for 30 years, Robert Siegel delivered the day’s news to millions of listeners across the country who tuned in to find out more about the events shaping the world around them.

And he was there to report on many of the most memorable events of the last four decades. He was in New York City on September 11, 2001, where he ended up reporting on the tragic events that unfolded that day. When a massive earthquake hit Chengdu, China, Siegel was there to cover the aftermath. 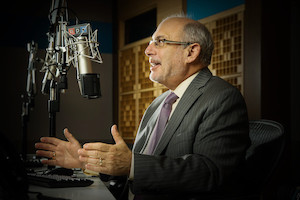 This month, the Reporters Committee for Freedom of the Press will honor Robert with a Freedom of the Press Award in recognition of his more than four decades of leadership in journalism, during which he made sure that people, as Margaret Low, the former senior vice president for news at NPR, puts it, “not just heard the news, but actually understood the news and why it mattered to them.”

“For every story of significance in the last four decades, Robert has been there reporting with relentless curiosity, tough questioning, and human understanding,” said Bruce Brown, executive director of the Reporters Committee. “We could not be more thrilled to be honoring one of journalism’s greatest standard-bearers, who spent his career not only bringing to light some of the most important issues of our time, but setting an example for journalists to come of how to do it with a sense integrity and values that embody the First Amendment.”

Robert launched his journalism career in New York, where he was a morning news reporter and talk show host for WGLI radio and later was a reporter, host, and news director for WRVR radio. From there, he joined NPR, where he would work for 40 years across a variety of roles, opening the station’s London bureau and directing its news and information department before becoming the host of All Things Considered in 1987. He hosted the show for 30 years, during which Robert’s name became synonymous with NPR, before he retired in January 2018.

“Up until he left, Robert was the voice of NPR. Who didn’t know Robert Siegel?” said Carline Watson, executive producer of NPR’s All Things Considered.

His impact extended far beyond the familiarity of his voice and into the lives of NPR’s listeners, who turned to him for a little over two hours each day to find out the latest in world events, politics, economics, history, and more — and why it mattered.

“Robert’s whole professional life was based around the public’s right to know, the importance of shining light in places where it’s not,” said Low.

Robert’s award-winning reporting included a documentary, “Murder, Punishment and Parole in Alabama” — which profiled a series of parole cases in the state from the perspectives of the families of both inmates and their victims — and his series of interviews with homeless people in New York that culminated in an All Things Considered story, “The Mentally Ill Homeless.”

“Especially in this moment where there’s so much news so constantly, Robert has an ability to see what’s different and what’s important,” said Ari Shapiro, who succeeded Robert as host of All Things Considered. “There’s a whole generation of journalists today who are doing what we do because of Robert doing what he did for so many years.”

In addition to Robert, the Reporters Committee will honor The New York Times Executive Editor Dean Baquet, Florentine Films documentary filmmaker Lynn Novick, and BuzzFeed Vice President of Legal and Associate General Counsel Nabiha Syed on May 22, 2018, at the Freedom of the Press Awards.