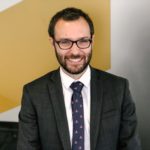 Adam A. Marshall is a senior staff attorney at the Reporters Committee for Freedom of the Press. His work includes litigation in federal and state courts, writing amicus briefs, and training journalists. Adam is the co-author of a chapter on the federal FOIA in Troubling Transparency (Columbia University Press, 2018), along with Katie Townsend.

Adam a recipient of the President’s Volunteer Service Award and the GW Law Pro Bono Service Recognition Award. In 2017, he was named to the Forbes “30 Under 30: Media” list for his work promoting government transparency, including the development of the FOIA Wiki. He graduated from The George Washington University Law School with high honors and as a member of the Order of the Coif. During law school, he served as an associate for the George Washington International Law Review, volunteered for the Mid-Atlantic Innocence Project, worked as a research assistant for Alan B. Morrison, and served as the president of the GW ACLU student group. Before attending law school, Adam received a bachelor's degree from Kalamazoo College where he graduated magna cum laude, and studied abroad at the London School of Economics.

You can find Adam on Twitter (@a_marshall_plan) or contact him via email at amarshall --at-- rcfp --dot-- org.

Admitted to practice in Maryland and Washington D.C.