The Reporters Committee for Freedom of the Press hosted its 2016 Freedom of the Press Awards at The Pierre in New York City on May 17, honoring Eve Burton and the Office of General Counsel at Hearst, and Alberto Ibargüen and Eric Newton of the John S. and James L. Knight Foundation. 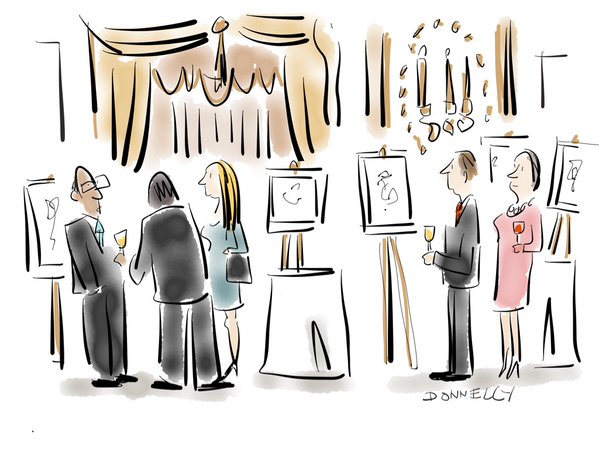 Attended by nearly 500 journalists, media lawyers and other supporters of the First Amendment, the evening featured a series of awards to individuals whose work has exemplified the highest ideals of protecting and practicing press freedom.

The event also was host to a silent auction of more than 20 original works donated by leading cartoonists, as well as live drawings by New Yorker/editorial cartoonist Liza Donnelly. 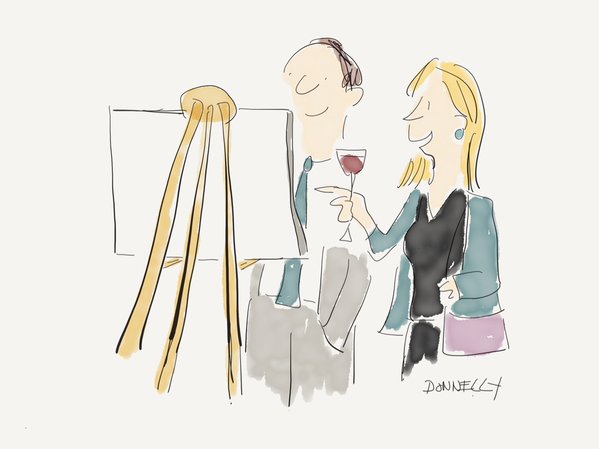 “We’ve all benefitted from seasoned veterans in our newsrooms who have seen and covered so much. We share their knowledge, they offer their counsel, and who know what it is that’s so vital about what we do and why journalism matters. And they keep our journalistic compass pointed in the right direction,” Holt said. “We have a name for that person at NBC News. We call him Tom Brokaw, and every newsroom would be lucky to have one.” 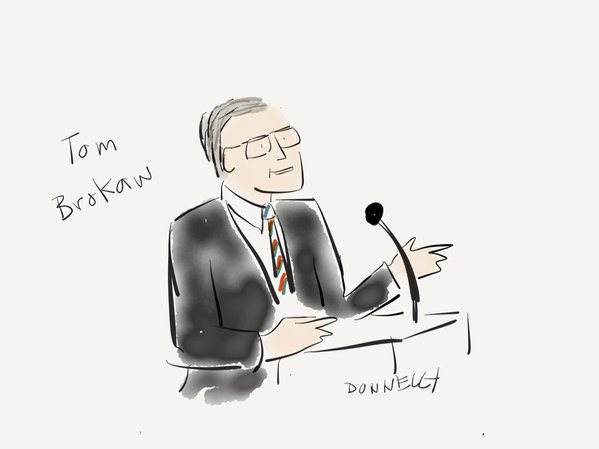 Brokaw noted, “I’m priviledged to be a part of this honor. But it’s more than just one night. This work goes on day in and day out. It goes on beginning with the excellence of the work that we do. Work we can defend. Work that upholds the great traditons of American journalism.

“The Founding Fathers gave us the First Amendment — the First Amendment. And they did that with good reason,” Brokaw continued. “Because they knew the future of this country would depend on the free flow of information and the exchange of ideas. Everyone in this room is a part of that, and It’s been my privilege to spend most of my life doing just that.”

“We have some very brave reporters in this room tonight, and some very brave editors. But let’s take a moment to thank a woman who allows us to be brave by giving us the power, the weaponry, the strategy and, above all, the legal and moral standing to fight the good fight,” said Hearst Executive Vice Chairman Frank A. Bennack Jr. in a video tribute to Burton.

“We are all grateful to Eve because in the end, we are all better at what we do because she is so good at what she does for all of us, not just those of us at Hearst, but all of us who labor at the honorable task of shining light into dark places,” he said. 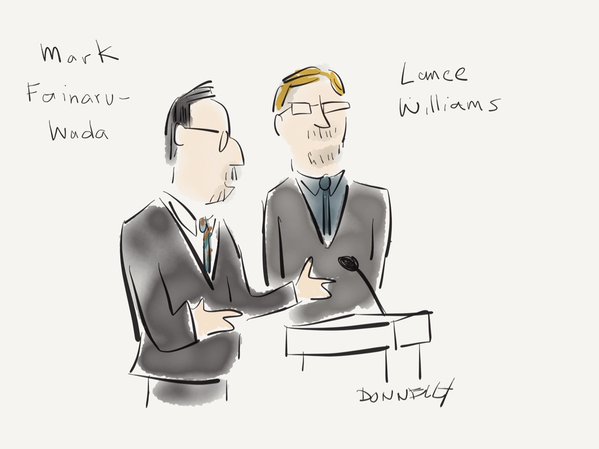 Mark Fainaru-Wada and Lance Williams, who were represented by Burton when the former San Francisco Chronicle reporters were subpoened for their sources in the groundbreaking BALCO steroids investigation, introduced Burton and presented her with the Freedom of the Press Award.

“Lance and I experienced firsthand the true force of nature that Eve is,” Fainaru-Wada said. “She changed and shaped our lives in ways we’re never going to be able to forget and never be able to repay.”

“So now Mark and I always say to reporters: If you’re jammed up, dragged into a source case, have somebody reach out to Eve Burton at Hearst,” Williams said. “She has a million ideas, she is a reporter’s truest friend, and it is great to be able to publicly say how much we thank you for your efforts on behalf of us and all reporters every place.” 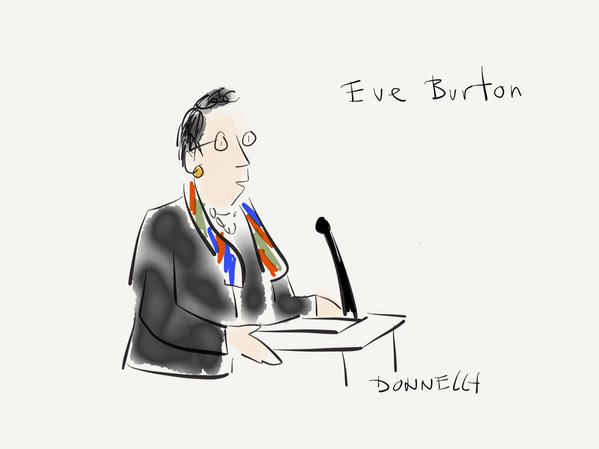 Noting that the First Amendment is a “team sport,” Burton said it is “also like a muscle: It has to be exercised. As Lee Bollinger said, ‘The First Amendment exists only in theory without a constituency of support.’ And every single one of you here, whether you are a Pulitzer Prize-winning journalist, a cub reporter, a lawyer — those who have argued some of the most important Supreme Court cases under the First Amendment — and the executives who have supported the mission, which is expensive, have all been part of preserving free speech.”

Burton also noted that it is important to have “a cultural mesh” between technology companies and established media “so that the country can speak the same language when it comes to the First Amendment.”

Alberto Ibargüen and Eric Newton of the John S. and James L. Knight Foundation were introduced by Marty Baron of The Washington Post, who said of the honorees, “I can think of no more devoted advocates of free expression.”

“Free expression imposes an obligation on every individual who hopes to enjoy its liberties,” Baron added. “The Freedom of the Press Award goes to two individuals who made that obligation their life’s work.” 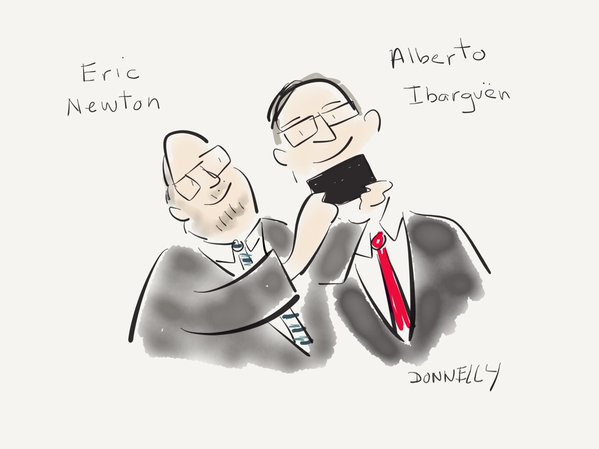 Discussing the Knight First Amendment Institute at Columbia University, announced earlier that day, Ibargüen said, “Eric and I are not the type to wring our hands and lament that the world has changed and that power seeks greater and greater control of information. Power and change have always been. We accept that challenge. But the truth is that we don’t yet fully understand the implication of our lives in the internet or know the way future generations will interpret free expression.

“So our vision is that the Knight Institute, devoted to principle and able to evolve with technology, will effectively advocate in favor of the right to know and the right to tell for freedom in a future we can’t yet imagine and against the relentless enemies of free expression,” Ibargüen added. “We stand for free speech, free press and for a free people.”

Both dinner chairs offered welcome remarks and congratulations to the honorees. You can watch Tim Armstrong’s remarks to the crowd here and view Lee Bollinger’s welcome video online here.

Earlier in the evening, Holt welcomed attendees with a reminder that while we fight to protect freedom of the press in the United States, for journalists overseas — many working for U.S.-based news organizations, such as freelancer Austin Tice — “there is no court of appeal. There is no Reporters Committee. There are only beatings and intimidation and jail and sometimes death. So as we honor our exemplary defenders of press freedom tonight, let’s also take a moment to remember all of our colleagues who can’t come home, those who won’t come home, and those we believe will come home.” 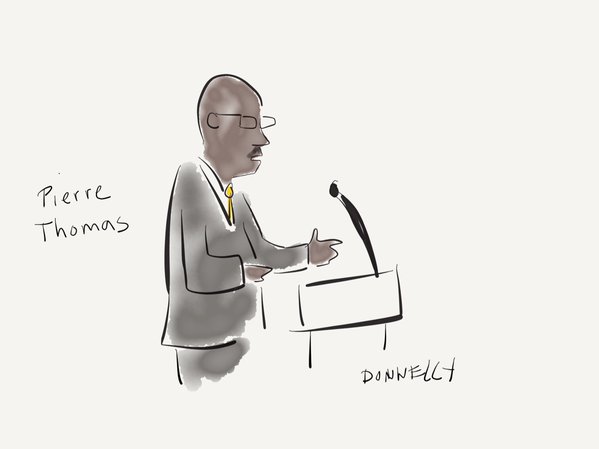 Thomas noted that, “As chairman of the Reporters Committee, I’ve come to appreciate the broader scope of press freedom issues affecting my colleagues, and how important it is to protect those rights.

“Unfortunately, in an age of ever-tightening budgets, our resources don’t always allow for the legal costs associated with a challenge for information or access,” Thomas said, adding that the 2016 dinner was the Reporters Committee’s most successful. “This makes the work of the Reporters Committee increasingly more important to preserving press freedom in the United States — and it makes your support for our work all the more appreciated and crucial.” 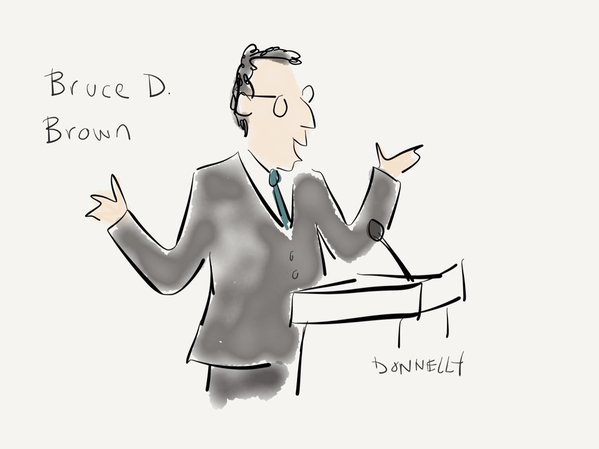 Looking to the future, Brown explained that the Reporters Committee “is broadening the range of our work to meet the needs of evolving and expanding media —from non-profit investigative journalism, to documentary filmmakers, to protecting the right to know from the right to be forgotten.

“Our move into litigation over the last two years – we are now representing journalists and news organizations pro bono in access and public records cases – is already leading to some notable victories,” he added.

Special thanks to our 2016 Freedom of the Press Awards supporters