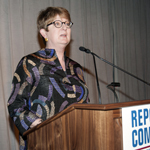 Let me start by saluting our excellent dinner chairs, Donald Baer and Don Graham, for their important work and support.

And congratulations to Carol, Arthur, Bruce and Sharon, rightly honored for their work on behalf of the values that the Reporters’ Committee upholds. We are indebted to you.

Speaking with all of you is as close as I am likely to come to preaching to a choir. Everyone is here because believe deeply in the rights of journalists to work freely and without fear.

Yet we all know just how fragile and eroded those rights have become.

Indeed, we could spend all night railing about the officials and agencies that are nibbling away at press freedoms … heck … some aren’t nibbling … they are taking great chomping bites.

But ranting and railing about it won’t change a damned thing unless we are willing to deepen our own commitment to the fight.

The framers of the U.S. Constitution had no particular reason to love journalism _ or journalists. Yet they recognized that we are an essential part of a system they were building to protect the rights of all _ even those who annoy you.

It’s time for us to ask … Are we holding up our end of the bargain?

Are we exercising those rights every day, or letting them wither through our own neglect?

Sadly, there’s way too much withering going on.

That’s on us. We must stop it.

The current president of the United States has decided that significant portions of his job should be conducted in private — things like signing legislation surrounded by lawmakers and smiling citizens. Or meeting with donors on the road.

The press — and the public — are shut out. The White House says “well, if anything interesting happens, the president’s own photographer will take the picture.”

When governments are covering themselves with taxpayer-funded journalists, who needs independent coverage?

And maybe that’s their point.

Of course we are pushing back, insisting that a president’s activities are public information and engaging in the endless meetings required to make the point over and over and over.

To do otherwise would let coverage of the White House turn into one long stream of cheerful selfies of a president who doesn’t bother to answer questions, from journalists or the citizens they represent.

The condition known as ‘’It’s-none-of-your-business’’ is wildly contagious.

It took Bill de Blasio’s staff no time at all to catch on. The newly minted mayor of New York tried to shut the press out of his very inauguration and relented only when we created a fuss. And it’s clear that the most-used rubber stamp in his office is the one that says “closed to the press.’’

Who, exactly, do these public officials think they are working for? Because they sure don’t act like it’s the public they represent.

The atmosphere in the U.S. intelligence community has gotten so prohibitive it would be silly if it weren’t so serious. There are tens of thousands of intelligence employees in 16 agencies, and none of them can discuss ANYTHING with a journalist about without permission. Every encounter — no matter now benign — must be reported back to the intelligence bosses.

So, if your kids play together on the same team, mutual sideline grumping about the coach must be reported. If you compare organic apples in the produce aisle, that’s gotta go back to HQ, too.

It may sound trivial, but the consequences aren’t. Intelligence employees can lose their jobs and go to prison if they are caught talking. And as we know all too well, a few journalists are being shoved toward a jail cell, too.

Governments aren’t alone. Celebrities and their handlers try to control what reporters can ask and want to trade interviews for favorable angles and photo placement.

Some sports leagues go even farther, trying to claim ownership of news organizations’ coverage in return for a credential.

These are the things that can make our profession feel under siege in the United States.

The fights we wage here are administrative parlor games compared to what happens in the many countries where officials intimidate, jail, torture and murder journalists without fear of consequence.

Those brave colleagues — and they ARE your colleagues — are fighting for even a sliver of the freedoms that journalists in the United States were handed at the nation’s birth.

We have no right to squander those freedoms.

Yet every time we accept a public official’s calendar littered with events marked “closed press,” that’s exactly what we are doing.

Every time we choose to gripe with colleagues instead of insisting that meetings be pried open or a that taxpayer-funded spokesmen talk on the record, we yield another inch.

Every time we slink away quietly when a press aide tell us “no questions,” we hand back even more.

No questions? Give me a break. These are adults. If you don’t want to answer a question, don’t answer it. Just don’t tell me I can’t ask.

Each one of those stupid little concessions is an admission that governments can do what they want and that they alone will decide what the public knows about it.

Yes, the last decade has been a tough one for the profession and the solutions are not yet firmly in hand.

Those very real issues cannot distract us from the work of keeping the public’s information in the public view.

This kind of fight is hard work. It’s grinding every day, pushing, insisting, winning, losing, going back at it again and again.

Just ask Carol Rosenberg, who has spent more than a decade pounding her fist bloody on the iron door of Guantanamo.

It can be soul-sucking and boring. It can be lonely.

Fellow journalists may be perfectly content to sit on the sidelines instead of joining you.

It can be scary.

Powerful government authorities may turn on you.

They may attack directly or just shut you out, doling out special access favors to the journalists who don’t make fight them on this.

But fight we must. And that’s why I ask you, who already believe deeply in this mission, to do more …

Make sure that everyone in your newsroom understands the open meetings and records laws in place for all the entities they cover and, more important, they are using them robustly every single day.

Don’t segregate that knowledge to “the FOIA person.” Make it a core skill for every editor talking with field journalists.

Set aside competitive issues when there’s a fight for access. We can and do succeed when we join the fight together.

And don’t lose sight of the real goal, which is open access, not whose turn it is to run the media coalition meeting.

And, if you have connections to journalism schools insist that the students know their rights and — this is really important — that they have spent extensive time actually exercising those rights. A semester with a hardback media law book isn’t nearly enough.

It’s great to learn Final Cut Pro in class, but your video won’t mean squat if you’ve let yourself get shut out of something because you didn’t know how to get in.

I’d much rather have a graduate who has worked the FOIA system, knows how to track and file her own appeals, and has some good stories and images to show for it.

Tonight, we are gathered in this nice room saluting worthy winners and we’ll go home feeling pretty good about what we do.

If we leave it at that, we have failed.

We must begin anew tomorrow. We must train current and future journalists for the fight. We must make this a priority in every corner of every newsroom. And we must make fighting for access as important Twitter followings and prizes for the wall.

These freedoms are an amazing gift. We must do everything we can do keep them limber, muscular and strong enough to endure for the generations that follow us.

It is a sacred responsibility and I ask each of you to recommit to that effort tonight.