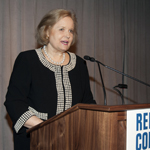 Thank you Judy, for your kind words; and thanks as well to Don Graham, Don Baer, Bruce Brown and your terrific colleagues at the Reporter’s Committee.

Thomas Jefferson said that when the press is free, and every man can read, all is safe. He knew it would not be easy, even in a country built on the First Amendment.

One thing that drew me to public broadcasting IN 1973 was watching and listening to the Watergate hearings on public television and radio. Of course, that was before C-SPAN, cable news and the Internet.

If, like me, you were a young mother in rural West Virginia, PBS and NPR were literally the only places to watch and listen, gavel to gavel, as history unfolded. Then and now, public media has been committed to presenting the daily tensions of democracy — between Congress; the president and the executive branch; the courts; the public; and the press.

In producing series like “Washington Week With Gwen Ifill” or in doing daily journalism for “The PBS NewsHour,” one come to accept that doing great reporting usually upsets someone. That may be especially true of public media, since so many of us think of our public television station as “my channel.”

One great pleasure in my job has been the chance to collaborate with many of the top journalists in public broadcasting: people like Jim Lehrer, Robin MacNeil, Judy Woodruff, Gwen Ifill and the NewsHour correspondents. As you may know, WETA recently agreed in principle to take on full stewardship of “The PBS NewsHour.”

As we move into that new role, we will continue to demonstrate our unflinching commitment to a free press. We will also help ensure that PBS continues to present the best and most authoritative news and documentaries available anywhere.

Thank you so much for this wonderful evening and for this memorable award.