Thank you Maria Luisa and Rich. After that introduction, I am not quoting the usual James Madison, Thomas Jefferson, or Mark Twain. Instead, I turn to Golda Meir. Golda Meier once told a diplomat:  “Don’t be so humble. You’re not that great.” 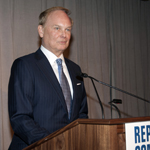 Despite that advice, I do feel humble tonight to be in the company of people who have pumped their blood into the heart of journalism. No CEO of any journalism company has navigated the whitewater of the digital transformation with more innovation and cheerful success than Rich Boehne and Maria Luisa Ferré Rangel. And look at these other award recipients: my friend Sharon, on whose Board I am honored to serve, and who is an authentic Godsend to PBS;  Carol, whose journalism continues to dazzle us; and  Arthur, who has steered a great American journalism enterprise through the digital turbulence with tenacity, courage, and agility.

For years, the Reporters Committee has been a very plausible marriage between journalists and lawyers. I have two observations about the twin beds of that marriage:

First, Lawyers: Ted Koppel is no Mark Twain, as you will see, but years ago I heard him charm a ballroom full of broadcasting executives by noting that he was married to a lawyer and he did to his wife what the broadcast executives would like to do to their lawyers. My clients laughed a little too loudly.But the truth is that no lawyer gets to stand at a place like this without an overwhelming sense of gratitude to clients who brought out the best, and to fellow colleagues and family. At BakerHostetler, I have been blessed with a Mississippi River of zany, demented talents – to name some, risks missing others – but tonight I thank Lee and Lenny and Henry, Doug, Bob, Stephanie, Anne, Mark, Bruce, Elizabeth, Schweitz and Marsha. At home, during all those years, there has been the constancy of Marilou whom I love really more than the Constitution.

Second and finally, a thought about journalists. During the first half of my professional life, I helped renovate America’s First Amendment law, hammering every day alongside wonderful lawyers like Floyd and Bob Sack. No term of the Supreme Court passed without decisions expanding First Amendment law to protect journalists from punishing libel verdicts, to open court proceedings, or to give reporters freedom from the fear that a censorious government would seek vengeance on sources of information. Mostly, we won those cases because at the heart of them was journalism that mattered.

There are no such First Amendment decisions from the Supreme Court any longer — there have not been for many years now. The law has remained as stagnant as an aging oaktree on an airless summer lawn. But, tonight, I give you my belief that on the other side of the digital divide, we will see a new era of First Amendment cases. Those cases will involve the different vernacular and practices of online journalism as well as the more familiar clash between government and the public’s right to receive information. If we have in those cases the kind of selfless public service journalism that formed the backdrop for our cases in the last quarter of the Twentieth Century, then we will see First Amendment protections for journalists and their media companies continue to advance.

Thank you for this award.