The first person the Reporters’ Committee honors tonight is a woman who had many choices other than devoting her professional life to keeping the public informed. She came from a background of prominence, the daughter of a United States Senator, married into another prominent family, and she had many options. But when she was a young mother, public media caught her attention. 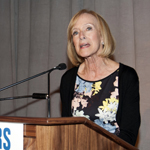 She was living in West Virginia, raising 3 children under the age of five, when the Watergate hearings aired in their entirety on PBS. She became hooked. She understood immediately the impact of public broadcasting and how it could change lives for the better. Since then, she has devoted a huge part of her time and energy to seeing that the American people have access to the best in educational, entertainment and — most relevant to us here tonight — public affairs programming on television and radio.

From her early involvement in local public TV and radio, in West Virginia and in Washington, D.C., to her pivotal roles on the boards of the Corporation for Public Broadcasting and PBS, nationally, she has been a champion for excellence and accountability. She has long since known that in order to do the programming that the American people count on from public media, there have to be resources to make it happen. She’s a determined fundraiser, going out on a limb for essential financial support to make programs like Ken Burns’ groundbreaking documentaries. For more than 30 years, she has been actively involved with the flagship public television station in the nation’s capital, WETA, Washington educational television; for the past 25 years, she’s been its president and CEO.

As for her role in the creation of PBS’s nightly news program, founded and originally anchored by Robert MacNeil and Jim Lehrer, I’ll quote Jim:

“Sharon Rockefeller has been with us and The NewsHour lock, stock, barrel and soul since the beginning. She has always understood who we are and what we do — and why. She is the best friend we as journalists have ever had — or ever will have…. She is, quite simply, the best.”

Please join me in congratulating Sharon Percy Rockefeller, as we present her with the 2014 First Amendment Award.