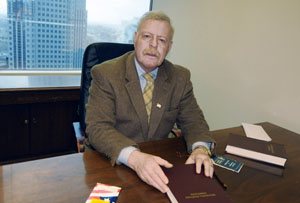 Marshall Tanick, above, represents Dr. David McKee in a suit against McKee’s patient’s son for defamation after critical remarks about the doctor were posted on rating websites.

Dennis Laurion did not like the way a Minnesota doctor treated his father after the elderly man suffered a stroke, and he wanted to make sure others knew about his family’s experience.

So Laurion went on several rate-your-doctor websites and posted negative reviews of Duluth neurologist Dr. David McKee. He didn’t stop there — he also sent letters to the hospital and several medical associations echoing his complaints about McKee’s care.

In most situations, the story would have ended there. McKee, however, aggressively fought back to protect his reputation by suing Laurion for defamation. The posted online statements are now under review by the Minnesota Supreme Court in a case that could test the limits of how far Internet-based reviewers can go to criticize their subjects.

“The case may not break a lot of new ground legally, but it stands as a powerful reminder that if (content creators) make mistakes in what they write online, they may be held accountable for it,” said Eric Goldman, an associate professor at Santa Clara University School of Law in California who tracks such suits.

At issue in McKee’s appeal is whether six statements Laurion published — descriptions of his account of McKee’s treatment — can be considered not just opinion but factual assertions capable of being proven true or false, the standard the U.S. Supreme Court established in its 1990 landmark opinion Milkovich v. Lorain Journal Co. for what constitutes opinion protected under the First Amendment.

Among Laurion’s postings are assertions that McKee declined to speak to the family after evaluating Laurion’s father, that the doctor seemed upset and scowled during the visit and that a nurse who spoke with the family afterward referred to McKee as “a real tool.”

In April 2011, Minnesota District Court Judge Eric Hylden dismissed McKee’s suit, concluding that none of the statements at issue were defamatory but rather “appear[ed] to be nothing more or less than one man’s description of shock at the way he and in particular his father were treated by a physician.”

McKee appealed the trial court’s dismissal to the Minnesota Court of Appeals, which in January reinstated the suit, sending it back to the lower court with instructions that a jury decide whether six of the statements harmed McKee’s reputation.

In one such statement, Laurion notes that McKee told the family he had to “spend time finding out if (Laurion’s father) transferred (to another hospital ward) or died.” The appellate court concluded that a jury was best suited to determine whether McKee made the statement in jest or whether the doctor blamed the family for wasting his time.

The appellate court also decided that it was a jury’s role to evaluate the truth of McKee’s alleged statement that it did not matter that Laurion’s father’s gown did not cover his backside. As for Laurion’s claimed encounter with the nurse who allegedly called McKee “a real tool,” the appellate court likewise found that a jury should decide whether Laurion fabricated the conversation.

Laurion appealed the ruling in McKee v. Laurion to the state Supreme Court, which heard oral arguments in the case in September. The court is expected to issue its opinion within the next few months.

Lengthy litigation not the norm

When defamation suits are filed against online reviewers, many are disposed of early in the process. Specifically, of the 28 defamation lawsuits that healthcare providers filed and Goldman tracked, 16 were dismissed, six settled, and the remainder were pending.

In six of the cases Goldman followed, the online reviewers-defendants were able to take advantage of state anti-SLAPP legislation. Short for “strategic lawsuits against public participation,” such lawsuits often are couched as defamation or other tort claims aimed at intimidating and silencing critics of businesses. Such legislation often allows judges to dispose of meritless lawsuits early, and in many states the anti-SLAPP law allows judges to award successful defendants reasonable costs and attorneys’ fees.

Such protections are crucial to ensuring that the First Amendment’s strong free speech guarantee applies just as forcefully to the Internet generally and user comments posted on review websites specifically, media advocates say.

“Consumers should be able to freely discuss their experiences without fear that somebody is going to come knocking on the door with a lawsuit,” said John Swapceinski, co-founder of RateMDs.com, an online review site of medical professionals. The company established on its website a self-described “Wall of Shame” that identifies doctors who ask prospective patients before accepting them as patients to sign what the organization dubs “gag contracts,” or agreements promising not to write any opinion pieces on Internet review sites.

Kristen Whisenand, a Yelp spokeswoman, said reviewers are within their rights to express their opinions and share their experiences with businesses. The company, which Whisenand said receives requests daily to remove negative reviews, discourages the “nuclear option” of suing over a negative review, in part because doing so often draws more attention to the negative review and because such suits are rarely successful.

Yet such advice has not stopped the targets of such negative online reviews from trying to fight back through legal action.

In May, for instance, an Oregon pastor sought $500,000 in damages in a defamation suit against a mother and her daughter and three other former church members for allegedly writing negative blogs about his church, describing it as “creepy” and “cult-like,” according to the pastor’s complaint.

And in January, the owner of a Chicago violin shop sued an online reviewer for defamation over the alleged posting of statements claiming that the shop performed unnecessary repairs and sold overpriced and falsely identified instruments.

In October 2011, the owner of the Grand Resort Hotel & Convention Center in Pigeon Forge, Tenn., sued review site TripAdvisor.com for defamation and false light invasion of privacy after the site announced that the Grand Resort topped its then-annual list of the dirtiest hotels in America — a ranking based on users’ online reviews and comments. (The next January, the month TripAdvisor traditionally released its dirtiest hotels list each year, the company announced that it was abandoning the practice in an attempt to “stay more on the positive side.”)

This past September, a federal judge in the U.S. District Court for the Eastern District of Tennessee in Knoxville dismissed the suit, finding that a reasonable person would view TripAdvisor’s dirtiest hotel list as nothing more than “the opinions of TripAdvisor’s millions of online users.”

“TripAdvisor’s list is of the genre of hyperbole that is omnipresent. From law schools to restaurants, from judges to hospitals, everything is ranked, graded, ordered and critiqued,” U.S. District Judge Thomas W. Phillips said in his order granting TripAdvisor’s motion to dismiss the claims in Seaton v. TripAdvisor, LLC. “A reasonable person would not confuse a ranking system, which uses consumer reviews as its litmus, for an objective assertion of fact. . . . Though TripAdvisor’s method of arriving at its conclusions, unverified online user reviews, is a poor evaluative metric, it is not a system sufficiently erroneous so as to be labeled ‘defamatory’ under the legal meaning of the term.”

In addition, although the decision does not explicitly mention Section 230 of the Communications Decency Act of 1996, it indirectly affirms the law’s grant of immunity from defamation claims to Internet publishers who, like TripAdvisor, merely accept and compile — but do not substantially alter — content provided by third parties, including those users’ subjective opinions.

In California, some legal experts and online content providers are hoping that a recent unpublished defamation opinion involving a critical blog post will pave the way for broader protection for those who air their opinions on the Internet.

The case stems from a January 2011 commentary published on one of Gawker’s technology blogs, Gizmodo, about the chief executive of a small startup technology company. The Gizmodo article questioned the feasibility of the executive’s product claims and provided several links throughout the piece to the technology executive’s various websites and online video clips promoting his products.

In a unanimous opinion by Justice Sandra Margulies, the appellate court found that bloggers generally cannot be held liable for defamation if they include hyperlinks to the source material showing readers the factual underpinnings of their opinion pieces and thus making it clear that the statements at issue represent the author’s own interpretation of those facts.

“Having ready access to the same facts as the authors, readers were put in a position to draw their own conclusions about [the executive] and his ventures and technologies,” the court said in Redmond v. Gawker Media, LLC. “As shown by the comments posted, many readers did view these sources, and not all of them agreed with the authors’ views. Statements are generally considered to be nonactionable opinion when the facts supporting the opinion are disclosed.”

In addition to this transparency, the article’s general tenor and language would give a reasonable reader the impression that the authors were expressing subjective opinions rather than reporting facts, the court said. The article’s tone and casual first-person style was akin to that of a sarcastic product or movie review — “negative about its subject matter to be sure, but with little pretense of objectivity,” it added.

Finally, the court found that the authors’ “qualifying language” disclaiming any intent to impute bad motives or character to the executive and inviting readers to do their own online research about him, along with the couching of their conclusions in the language of “apparency” — which included terms such as “arguably” and “seemingly” — reinforced the impression that the authors were expressing their personal perspective.

In late August, Professor Goldman — along with several supporters, including media companies, bloggers and public interest organizations — wrote Margulies urging her to publish the Gawker opinion, arguing that the decision provides important guidance to courts evaluating defamation claims based on online opinion pieces. The fact that the opinion is unpublished is significant because California court rules prohibit courts and parties in future actions from relying on the law announced in an unpublished opinion as support for their positions.

“This is a great case with major implications for free speech on the Internet,” wrote Ryan Metheny and Mark Goldowitz of the California Anti-SLAPP Project, a public interest law firm and one of the organizations urging the court to publish the Gawker opinion. “It is a case that should be published so that everyone who speaks online can benefit from the ways in which this case clarifies online defamation law and strengthens First Amendment protections for online speakers.”