In today’s digital age, the content from recent news reports can be instantly distributed across the Internet’s many blogs and news aggregation sites. But, it is often unclear what separates healthy and legitimate information-sharing from unlawful and harmful copyright infringement. Because online news aggregation can arguably harm the media industry’s bottom line, it may even affect companies’ ability to pay the journalists who do original reporting. 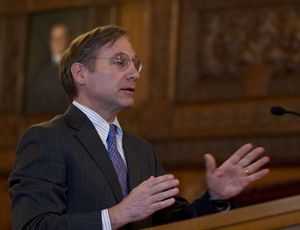 Attorney Michael Grygiel said the use of “a headline and only a very small snippet of information” with hyperlinks is likely to be considered fair use.

That issue was raised in a lawsuit brought by The Associated Press early this year. In The Associated Press v. Meltwater U.S. Holdings, Inc., et al., the AP is suing a company that uses the wire service’s content, arguing that Meltwater Group’s “Meltwater News” service — which is a news aggregator, or Web service that collects news reports — has committed both copyright infringement and the tort known as “hot news” misappropriation.

The AP claimed that Meltwater’s actions pose a threat to the news industry.

“The news industry today is facing a period of crisis. Numerous venerated newspapers and magazines have folded, while others have faced slashed budgets and reduced staff . . . Over the past decade, employment of full time newsroom staff dropped by over 26 percent. One of the significant reasons for this crisis is . . . aggregators, like Meltwater,” the AP wrote in its complaint.

Meltwater News describes itself as the online equivalent of a traditional “news clipping” service. Subscribers pay a fee for Meltwater to search the Web for content matching chosen search terms, and the service delivers to them headlines and a portion of articles, as well as a hyperlink to the original content.

The AP contended that it loses subscribers and licensees to Meltwater, such as the Department of Homeland Security, Lexis Nexis and Factiva, because Meltwater’s product can be used as a substitute for the AP wire. The news service has called Meltwater’s business practice “parasitic” because Meltwater does not pay for original reporting, and as a result, allegedly provides wire content at a lower cost.

Content aggregation is “a mainstay of journalism — referencing, building on (and appropriately crediting) the work of others. Most news articles are aggregations — of original reporting of expert information, of previous work that has acquired the status of B-matter,” Keller said by e-mail. “Where to draw that line is a matter for lawyers (or the Ethicist), not me. But I believe there is such a line.”

The AP argued that Meltwater’s news monitoring service crosses the line that separates lawful from unlawful aggregation practices, because as a “closed aggregation servic[e],” it charges a fee for the content it provides, does not drive Internet traffic to the sources whose content it uses, and also because it uses “lengthier and more systematic excerpts . . . than most news aggregators.”

“The loss of traditional news sources and their high-quality news gathering and reporting infrastructures represents a significant loss to the public, as a well-informed citizenry is an essential condition for a functioning democracy,” the AP wrote in its complaint.

The AP also claims that Meltwater’s search process — which scans a copy of an article and indexes the words — is copyright infringement, although, as Meltwater argues in response, this procedure arguably resembles the behavior of an Internet search engine.

“Meltwater operates like a standard search engine; it’s specialized to focus on news-related content,” said Brian Willen, attorney for Meltwater, in an interview. He also said that if the AP’s argument was accepted, it would lead to the conclusion that “unless [Google, Yahoo, and Bing] have a license, they’re engaging in copying.” A prior case, Field v. Google, found that Internet searches do not violate copyright law.

“Meltwater is a closed commercial business that systematically sells copyrighted excerpts of news stories,” wrote Elizabeth McNamara, AP’s attorney in the Meltwater case, in an e-mail response to the Reporters Committee about Meltwater’s claim. “It is an electronic clipping service. Meltwater bears little resemblance to search engines used by individual consumers who are seeking to be directed to websites.”

Meltwater’s defense against the AP’s copyright infringement claim turns on the well-known “fair use” defense. Unauthorized use of another’s copyrighted work may be considered legal based on: the purpose and character of the use, the nature of the copied work, the amount and substantiality of the portion of the work taken, and the effect on the potential market value of the work.

The AP argued that the excerpts Meltwater takes act as a substitute for the original product, citing research that almost half of the readers on news aggregation sites do not click through links to read the underlying work, and that as a result, Meltwater harms the potential market value of the AP’s work.

A right to property in hot news?

The AP’s other claim against Meltwater is for “hot news misappropriation,” a legal theory that recognizes a type of property right in breaking news.

The hot news tort was recognized in 1918 by the U.S. Supreme Court in AP v. INS, where the court found unlawful the International News Service’s activity of taking AP war reports from Europe — even bribing its employees to steal stories. A version of the hot news tort also exists in the laws in five states, including New York.

Because the hot news tort will usually be pre-empted by copyright law, it would likely apply only in an exceptional case, said attorney Michael Grygiel, who was involved in a content aggregation lawsuit similar to the Meltwater controversy, GateHouseMedia  v. The New York Times Co. case.

More recently, in Barclays v. Flyonthewall.com, Inc., the same circuit court held that financial firms Barclays, Merrill Lynch and Morgan Stanley could not bring a hot news lawsuit against company Flyonthewall for publishing their financial reports, because reporting the information did not fit the pattern of a hot news claim — among other reasons, because the Web service was not free riding on the financial firms’ efforts.

“Firms are making the news; Fly, despite the Firms’ understandable desire to protect their business model, is breaking it,” the court held.

Flyonthewall makes clear that courts view hot news as “very narrowly limited to a certain type of factual setting,” said Grygiel. He added that he sees the tort applying where an organization is committing “what would amount to unfair use of . . . information, where a second party is consistently and routinely appropriating . . . information when it has been acquired and published by another entity.”

The AP v. Meltwater complaint, which is also in the Second Circuit, argues that Meltwater’s business fits the factual pattern of hot news misappropriation. The AP wrote in its complaint that unlike the firms in Barclays, “The AP reports news; it does not ‘make’ news, except on rare occasion.”

But the tort is controversial in some circles. Citizen Media Law Project attorney Andy Sellars thinks a hot news tort is unconstitutional, and that it has a “chilling effect” on speech.

“The effect [of the hot news tort] is you are slowing the speed at which facts can reach their audience,” he said. “It’s not something that could be practically implicated, and it would cause problems if it could.”

However, Grygiel, and his adversary in the GateHousecase David Hosp, both stated separately in interviews that the hot news tort retains its viability. “The hot news doctrine is alive and well,” Hosp noted.

GateHouseMedia argued that the Boston.com practice constituted copyright infringement. The Times Co. said that linking is a common Web practice, arguing it benefited the content creator. But the sides settled the lawsuit. Boston.com agreed to stop aggregating GateHouseMedia’s news content.

Because of the settlement, the court never tackled the legal question of when content aggregation becomes theft.

Earlier cases that might have provided guidance also settled without a court decision. In 2008, the AP sued All Headline News Corp. for rewriting its stories and re-publishing them in its name, and All Headline News settled with the wire service, admitting it had improperly taken AP content. In 2010, the website Briefing.com settled a lawsuit with Dow Jones & Co., admitting it had committed hot news misappropriation, and copyright infringement.

Grygiel, who represented the plaintiff in the GateHouseMedia case, said that the use of “a headline and only a very small snippet of information” with hyperlinks, for curatorial purposes, is likely to be considered fair use. He noted that determining whether content aggregation was fair use would be difficult to generalize about, and would depend on the facts of a case.

Hosp, who represented The New York Times Co. in the same case, said that news aggregation is a complex issue, and that news organizations can profit from the practice, if the right balance is struck.

“The reality is that news organizations also often engage in news aggregation, offering links to, and leads, from other news sources,” said Hosp. “The balance is going to be found in permitting some cross-linkage, while making sure that the process generates value both to the linkor and linkee.”

And while there may be no easy answer to the question of how the right balance can be struck with content aggregation that will benefit, rather than harm, the news industry, much may be at stake in resolving the issue.

“It goes without saying that without reporters getting paid for doing the difficult work of reporting, it winds up depriving our democracy of the information that also serves at its lifeblood. And that is obviously something that is of great concern to all us,” said Grygiel.