President Barack Obama’s transparency record is a consistent topic of interest throughout his presidency, as many have viewed his actions against the backdrop of the pledge he made upon entering office to run a more transparent administration. 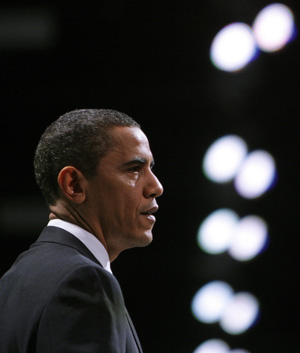 While some actions he has taken during his time in the Senate and in his presidency have increased access to information, others have drawn criticism for falling short of public expectations of his administration’s transparency.

For example, during his Senate term, he co-sponsored the Federal Funding Accountability and Transparency Act of 2006. It created USASpending.gov, a website which provides information about — among other things — federal grants and contracts.

In 2010, as president, he signed the Patient Protection and Affordable Care Act into law which, like Romney’s health care bill, increased disclosures of health care-related information. One provision in the act, for example, requires drug and device manufacturers to report “payment[s] or other transfer[s] of value” they provide to “covered recipient[s],” such as gifts to physicians. This information is to be made public online by Sept. 30, 2013. On its website, the Association of Health Care Journalists stated that this “will open a window on financial relationships between physicians and industry.”

Also, in a widely praised move earlier this year, his administration launched Ethics.gov, a website on which the public can access White House visitor logs, as well as campaign finance and lobbying data. As The Wall Street Journal reported, this site “fulfills a campaign promise” Obama made “to centralize ethics and lobbying information for voters.”

Finally, in pressing Romney to release additional tax returns, Obama’s campaign has emphasized that Obama has released his tax returns from 2000 to 2011.

On the first day of his presidency, he issued two memos that raised public expectations of transparency in his administration. One ordered the development of an Open Government Directive and stated his commitment “to creating an unprecedented level of openness in Government.” The other stated that the federal Freedom of Information Act “should be administered with a clear presumption: in the face of doubt, openness prevails,” and directed Attorney General Eric Holder to release FOIA guidelines to department and agency heads “reaffirming the commitment to accountability and transparency.”

News outlets’ analyses of agencies’ FOIA processing since then have revealed some improvements, but also some shortcomings.

During Sunshine Week this year, the Associated Press released the findings of its analysis of the past three years’ worth of federal agencies’ FOIA data, noting that “[t]he government’s responsiveness under the Freedom of Information Act is widely viewed as a barometer of how transparent federal offices are.” The AP determined that “[t]here was progress” in FOIA processing as, for example, 23 of the 37 agencies studied reduced their request backlogs or kept them from increasing. However, the government withheld records citing national security concerns 4,244 times in 2011, which was “a significant increase” from the previous year’s figure, 3,615.

In August, The Washington Post released its analysis of agencies’ FOIA data as well, reporting that last year, requesters “were less likely to receive the material than in 2010 at 10 of the 15 Cabinet-level departments.” According to The Post, while “[t]he early results” of Obama’s 2009 FOIA memorandum “seemed promising,” more recently, “progress has stalled.”

The administration has also come under fire for its treatment of leakers of government information and assertion of privileges to avoid releasing information. According to a January blog post by the Government Accountability Project, “[t]he Obama administration’s Espionage Act prosecutions for alleged mishandling of classified information number more than all past presidents combine[d].”

To oppose litigation seeking, among other things, records on alleged detainee torture and targeted killings, the administration has relied on the “state secrets” privilege. During his presidential campaign, Obama criticized the Bush administration for using this privilege — under which courts may dismiss lawsuits the government claims would result in the release of information harmful to national security — to avoid litigation.

According to the 2010 Secrecy Report Card issued by OpenTheGovernment.org, an advocacy coalition, the federal government invoked this privilege four times in 2009, all in cases that began during the previous administration. The coalition’s 2011 Secrecy Report notes that the government invoked the privilege twice in 2010 — once in a case that began in the previous administration, and once in a new case.

In another controversial move, Obama also relied on the “executive privilege” this year to shield U.S. Justice Department documents from “Fast and Furious” — a federal gun-smuggling operation — from a Congressional inquiry.