About 80 reporters stashed their notebooks, halted their Twitter updates and took a mid-day field trip in late June to the Mint Museum in Charlotte to watch Convention, a documentary on how The Denver Post covered the 2008 Democratic National Convention. 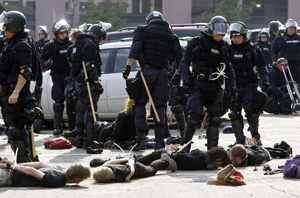 Police watch over a group of people who were arrested after a protest during the 2008 Republican National Convention in St. Paul, Minn. More than 40 journalists were arrested while covering the protests.

This is just one of the many ways The Charlotte Observer’s staff is preparing for the upcoming Democratic National Convention, which will take place Sept. 3-6 in Charlotte, N.C.

“You can study this stuff all you want and watch movies, but you won’t know what it’s like until you’re in it,” the paper’s political reporter Jim Morrill cautioned. “Things could happen. I don’t expect anything to happen, but you never know. Minneapolis didn’t expect it.”

The 2008 political party conventions in Denver, Colo., and St. Paul, Minn., triggered the arrests of dozens of reporters. As a result, police and journalists in this year’s convention cities — the Republican National Convention will be in Tampa, Fla., from Aug. 27-30 — are working to eliminate confusion about their respective roles at the big events.

Technological advancements have changed the way news is covered since the last political party conventions, at which time the iPhone was only a year old and Twitter was still somewhat in its infancy.

Walser said the last conventions created a concern that journalists could be mistaken for protesters. He said the publication has been planning its convention coverage for more than a year and in that time staff members have sought advice from the Associated Press security team and the convention staff. He also added that the newspaper will have lawyers on stand-by during the convention.

The U.S. Supreme Court has noted that journalists are entitled to some newsgathering protection under the First Amendment. However, the scope of that protection — and its restrictions — is unclear.

Most courts have ruled that journalists are not given a greater right of access to property than the public under the First Amendment. This will be true for journalists covering protests outside the upcoming political party conventions.

Tampa Police Department spokeswoman Laura McElroy said the department is not giving out press credentials to differentiate reporters from protesters.

While reporters and the public cannot be denied access to public forums, state law and local governments may impose reasonable time, place and manner restrictions on activities taking place on public property. These restrictions must be content neutral, be narrowly tailored to serve a significant government interest, and leave open alternative channels of communication, according to The Reporters Committee for Freedom of the Press’ First Amendment Handbook.

Although police officers may restrict access, they must suggest another place for journalists to do their jobs, according to media lawyer Ashley Kissinger, a partner at Levine Sullivan Koch & Schultz LLP in Denver. The firm ran the Reporters Committee’s hotline for journalists during the 2008 Democratic National Convention in Denver.

“Even if an officer is telling you, ‘I need to restrict you,’ he must provide you with ample alternative means of communication,” said Kissinger.

As in a number of states, there are laws in Florida and in North Carolina designed to prevent illegal wiretapping and to protect an individual’s right to privacy.

In North Carolina, the wiretapping statute is a one-party consent law, meaning one party to the conversation must consent to being recorded.

Under Florida law, it is illegal to record or film private conversations without the consent of all parties, meaning the person who is doing the recording and any other individuals who are being recorded must consent.

McElroy said the department is familiar with Florida’s laws and recognizes the right to record police activities in public places.

“The day and age that we live in, anyone has a camera at any time, so out in public there’s the expectation of being videotaped,” she said. “It hasn’t been an issue with our department.”

The Tampa Police Department reached out to its counterparts in St. Paul and Denver for advice before presenting its plan to the news media.

Denver Police Department Public Information Officer Sonny Jackson said transparency is vital for both journalists and the departments. “Let people know your intentions,” he said. “That goes for everybody.”

St. Paul Police Department Public Information Coordinator Howie Padilla said mutual respect is the most important factor in being successful. “Respect the work [journalists] do, but demand respect as well,” he said. “It’s a two-way street.”

In addition to contacting police in former convention cities, Tampa police held meetings with representatives from local media outlets, according to McElroy. Police officials have also met with attorneys for the Reporters Committee’s hotline.

“We’re in the listening mode right now with the local media,” she said. “When we are building our plan for the media we will keep those issues [the media voices] in mind.”

McElroy said one of the department’s first moves was to meet with the local media and address their concerns. “Then we will create a curriculum with sensitivity to the rights of the media and the protesters under the First Amendment for officers who will be involved in the day-to-day operations at the RNC.”

Robert Tufano, public information officer with the Charlotte-Mecklenburg Police Department, said the department is educating its officers “through departmental video and classroom sessions at [its] training academy.”

“The department is currently training and will continue to train our officers on media relations for the upcoming event,” he said.

Tufano said the department has also consulted police agencies that were involved in previous political conventions, such as the St. Paul Police Department.

Learning from the past

Officers with the St. Paul Police Department had their hands full outside the Xcel Energy Center four years ago. Up to 18 journalists were cited and nearly 50 journalists were arrested, including “Democracy Now!” host Amy Goodman, AP photographer Matt Rourke and a New York Post freelance photographer.

Although the city dropped all charges against the journalists arrested, Goodman sued the cities of St. Paul and Minneapolis for violating her First Amendment right to gather news.

In addition to asking for monetary damages, Goodman’s attorneys requested that the federal court enjoin future arrests of journalists in similar circumstances. The suit ended in a settlement, which included $100,000 in compensation and an agreement by the St. Paul Police Department to develop and implement a training program to teach officers how to handle the media, especially when the press is covering demonstrations.

The 2008 Democratic National Convention in Denver was not without controversy either. ABC News producer Asa Eslocker was reporting on links between large donors and party officials when he was grabbed and handcuffed on a public sidewalk. Eslocker, who was trying to film senators and donors arriving at a hotel for a meeting, was arrested and faced trespass charges, which were later dropped. He is the only journalist known to be arrested at the Denver convention.

Kissinger said incidents, like the arrests of journalists at the 2008 conventions, stem from a lack of education.

“The law is unclear, so imagine how officers are informed,” she said. “You see all these news reports where police officers are engaging in clearly unlawful actions. People usually win in this situation or they lose because the law is not clearly recognized.”

She said it’s important for journalists to give extra deference in this type of situation.

“Our experience when the Democratic National Convention was in Denver is that police officers are a little hypersensitive during those times, so police can sometimes go overboard more in that context,” she said. “Be extra careful not to violate ropes that may be set up to keep people out or instructions on where you can stand.”

She said that this does not mean journalists should be hesitant to assert their rights.

“While I say that, I don’t think journalists should be shy to cover what they are there to cover,” she said. “We’ll never advance the ball if they stop out of concern of being arrested.”

One recent development is the Glik v. Cunniffe decision, in which the U.S. Court of Appeals in Boston (1st Cir.) ruled last year that the First Amendment protects the right to record police officers in the public performance of their duties.

Kissinger suggests that journalists educate themselves on their rights to be able to better engage police.

“If journalists are approached by law enforcement, one line of defense is to say other people are here as well. They can’t discriminate against the press,” she said. “The person should say ‘I am simply videotaping a public figure in a public domain, my understanding is I have that right.’”

The U.S. Department of Justice weighed in on the issue when it submitted a letter to the Baltimore Police Department following a lawsuit filed by a citizen who was arrested for videotaping police activity in a public place.

According to the letter, which cites the Glik v. Cunniffe decision, a department’s policy should:

Kissinger said if journalists are being detained by police, journalists should “put them to the test” by asking “am I free to go?”

“You are now being physically detained, and you cannot be detained if you’re not in the process of a crime or about to commit a crime,” she said. “Say: ‘I have a First Amendment right to engage in this activity, and I am not here for an unlawful purpose. What basis, respectfully sir, what basis do you have for detaining me?”

Morrill said members of The Charlotte Observer’s staff are working with police, but “the department hasn’t been particularly forthcoming” about its specific plan for the media. He noted that this is because the department does not have all the answers and is waiting for the U.S. Secret Service to provide instructions.

The worst-case scenario for a journalist would be to get caught in the middle of a riot, according to Morrill. He suggests journalists be patient.

“I’ve been to conventions before and it can be frustrating even if nothing goes wrong,” he said. “Charlotte is small, unlike previous convention cities where you have to walk, walk, walk. Getting around might be a problem if journalists are not staying in town. Traffic could be an issue.”

WTSP News Director Peter Roghaar said the Tampa news organization’s reporters were assigned beats, and the station had a conference call with its corporate attorney and an attorney with the Reporters Committee.

“We’ve also discussed ‘lessons learned’ with two other Gannett TV stations that are in cities that recently hosted conventions,” he said, adding that the news organization has lawyers on stand-by.

His biggest piece of advice for journalists: bring sunscreen and drink lots of water.