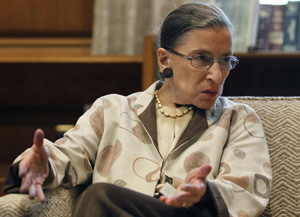 “‘The Paris Hiltons of the world,’ my law clerks told me, ‘eagerly await the decision.’ ‘It is beyond my comprehension,’ I told the clerks, ‘how the FCC can claim jurisdiction to ban words spoken in a hotel on French soil.’”

– Justice Ruth Bader Ginsburg on the then-pending Supreme Court decision on the FCC’s indecency policy during a talk at the American Consitution Scoiety convention.

“You don’t call somebody a piece of shit. That’s false light.”

– Larry Klayman, the founder of Judicial Watch, about statements made regarding the Esquire birther case.

“If we’re going to lose all of our privacy, then we’re damn well going to get some transparency.”

– Rich Jones, the creator of iPhone apps that encourage the secret recording of police, to the Citizen Media Law Project’s blog.

“The First Amendment has nothing to do with whether we have to televise our proceedings.”

– Justice Antonin Scalia’s response when asked about cameras in teh Supreme Court by C-Span’s Brian Lamb.

“To answer another recurring question, there will be no cameras in the courtroom to capture the announcement, nor any audio until much, much later. You are stuck with us.”

“Why not send a subpoena to the reporter? Put them in front of a grand jury. You either answer the questions or you’re going to be held in contempt and go to jail, which is what I thought all reporters aspired to anyway … I thought that was the crown jewel in a reporter’s resume to actually go to jail protecting a source. Give them what they want!”

– Rep. Trey Gowdy, (R-S.C.) at a July 11 hearing before the House Committee on the Judiciary Subcommittee on Crime, Terrorism, and Homeland Security.

“Because there are so many things that will be open again for more attack… and that’s really, that’s just the answer. And we’ve given all you people need to know and understand about our financial situation and about how we live our life.”