Within 24 hours of the U.S. Supreme Court overturning the Stolen Valor Act and agreeing with First Amendment advocates that criminalizing false claims about military service and medals is unconstitutional, the phone calls and e-mail messages started coming in. 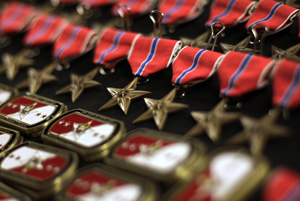 Bronze Star Medals are one of the more popular honors for deception used by imposters.

Mary Schantag, chair of the website FakeWarriors.org, got a handful of phone calls at her home in Missouri. Jonn Lilyea in West Virginia, who writes the veterans blog “This ain’t Hell, but you can see it from here,” received about 20 e-mail messages.

The request: fake veterans and medal recipients wanted their names taken off the sites — both of which garner thousands of hits each month and are known for printing the names of the very people that prompted the passing of the Stolen Valor Act in 2005.

“They misunderstood what the Supreme Court said,” said Lilyea, a retired Army infantry platoon sergeant. “They thought it meant it was illegal for us to put up their names, but the (justices) said the only cure for false speech is more true speech. And that’s what I consider my blog — true speech.”

In a 6-3 decision, the Court affirmed the ruling of the U.S. Court of Appeals in San Francisco (9th Cir.) found that the federal Stolen Valor Act was unconstitutional because of the severe limitations it placed on the First Amendment.

“Were the Court to hold that the interest in truthful discourse alone is sufficient to sustain a ban on speech, absent any evidence that the speech was used to gain a material advantage, it would give government a broad censorial power unprecedented in this Court’s cases or in our constitutional tradition. The mere potential for the exercise of that power casts a chill, a chill the First Amendment cannot permit if free speech, thought, and discourse are to remain a foundation of our freedom,” the opinion, authored by Justice Anthony Kennedy, stated.

But later that day, supporters of the Stolen Valor Act issued statements that the fight wasn’t over and that a new bill would be proposed.

Just two weeks after the ruling, members of both houses of Congress were already attempting to pass similar legislation with just enough tweaks to address the court’s free-speech concerns.

For the justices, one of the goverment’s main flaws was that it failed to prove that lying about receiving a medal diminishes the honor it confirms.

“The link between the Government’s interest in protecting the integrity of the military honors system and the Act’s restriction on the false claims of liars like respondent has not been shown,” the opinion stated. “The Government points to no evidence to support its claim that the public’s general perception of military awards is diluted by false claims such as those made by Alvarez.”

Xavier Alvarez was an elected member of a California water district board who publicly declared at a meeting that he was a Marine and Congressional Medal of Honor recipient. The problem — Alvarez never even served in the military.

During oral argument in February, Solicitor General Donald B. Verrilli Jr. argued that because the Act’s language was so specific, it did not have a chilling effect on speech.

“I guess the chilling effect seems to me, at least, to be materially different than in a situation like this one, where what we’re talking about is a very specific pinpoint thing, one thing: have you been awarded a military honor or not?” said Verrilli, who represented the government’s interest before the court. “And a statement that is about yourself only, not about somebody else, and is supported by a quite strong particularized interest in ensuring the integrity of the military honor.”

But in the Court’s opinion, the Act’s language, was in fact, quite broad.

“The sweeping, quite unprecedented reach of the statute puts it in conflict with the First Amendment. Here the lie was made in a public meeting, but the statute would apply with equal force to personal, whispered conversations within a home. The statute seeks to control and suppress all false statements on this one subject in almost limitless times and settings. And it does so entirely without regard to whether the lie was made for the purpose of material gain,” the opinion stated.

In the opinion, Kennedy also cited the friend-of-the-court brief filed by the The Reporters Committee for Freedom of the Press and 23 news media organizations for its examples of how public exposure can be enough to kill a lie and discredit its source, especially in the sphere of made-up military heroism.

“More than half of the heroic individuals who have been awarded the Medal of Honor after World War I received it posthumously. Congress was entitled to conclude that falsely claiming to have won the Medal of Honor is qualitatively different from even the most prestigious civilian awards and that the misappropriation of that honor warrants criminal sanction,” Justice Alito wrote in the dissenting opinion.

“The Stolen Valor Act is a narrow law enacted to address an important problem and it presents no threat to freedom of expression. I would sustain the constitutionality of the Act, and I therefore respectfully dissent.”

Justices Stephen Breyer and Elena Kagan concurred that the statute is unconstitutional but applied a lower “intermediate” standard of review in striking down the statute. That means that Breyer and Kagan balanced all competing interests when coming to their conclusion, as opposed to applying a strict or exacting scrutiny, which requires that a law be narrowly tailored to serve a compelling government interest in order to survive a constitutional challenge.

“The Government has provided no convincing explanation as to why a more finely tailored statute would not work. In my own view, such a statute could significantly reduce the threat of First Amendment harm while permitting the statute to achieve its important protective objective. That being so, I find the statute as presently drafted works disproportionate constitutional harm,” wrote Justice Breyer in the concurring opinion. “It consequently fails intermediate scrutiny, and so violates the First Amendment.”

Those who disagreed with the Supreme Court ruling — from lawmakers to military veterans — are now rallying behind new legislation tailored to address the justices’ constitutional concerns.

U.S. Sen. Scott Brown (R-Mass.), who served more than 30 years in the Army National Guard, is pushing for a bill aimed at those who lie about military achievements and seek to profit in some way from their misrepresentations with “intent to obtain anything of value.”

“Anything of value” could range from financial gain, a job or an award.

“Con artists who claim for themselves distinction and awards they don’t deserve should be held accountable,” Brown said in a radio ad released in July. “That’s why I am working on a new law that will punish military liars and cheats in a way that satisfies the Court’s concerns.”

Sen. Jim Webb (D-Va.), a former Marine and a Vietnam veteran, announced in July that he also would introduce legislation that targets those who clearly profit from their lies in order to “secure a tangible benefit or personal gain.”

Schantag, who runs the website FakeWarriors.org, said she hopes the bills gain footing and admitted that she was “extremely disappointed” in the Supreme Court ruling.

“I hope they realize that just because the court ruled as they did, we are not without alternatives to go after these individuals,” said Schantag, who added that she has refused imposters who requested that she take down their names from the liars list posted on the website. “These individuals are changing history. We can’t allow that to happen.”

Lilyea, who also runs a similar site exposing imposters, said he initially disagreed with the ruling.

“But I see how a law like that could be abused,” he conceded. “I tell you what, though, at first I was really upset. I had a friend killed in Mogadishu who was awarded a Purple Heart and a Bronze Star — and those are the two awards people most pretend they have. My friend died, and these guys are walking around with those same medals pinned on their chest and it doesn’t seem right to me.”

Both Schantag and Lilyea said that for now, they will focus on keeping their lists — just in case the bills don’t pass muster.

The Pentagon, after much public prompting and a push from the Supreme Court ruling, announced in July that it will look into creating a database of award recipients.

“We are taking another look,” said Pentagon press secretary George Little in an interview with The Wall Street Journal. “We are exploring options for creating a database of valor awards and medals.”

First Amendment attorney Robert Corn-Revere, who authored the Reporters Committee’s brief, said the lists are a better solution for exposing frauds than criminalizing them.

“We’re delighted that the Court has reaffirmed the basic constitutional principles and rejected the notion that the government can be the arbiter of truth,” he said in an interview with the Reporters Committee immediately after the ruling. “The marketplace of ideas provides the best test of truth rather than having some government mandate.”

The Reporters Committee issued a statement commending the ruling on behalf of journalists.

“Upholding this law would have opened the door to efforts by lawmakers to develop a list of subjects for which false speech would be punishable,” said then-Reporters Committee Executive Director Lucy A. Dalglish. “Those lists probably would have been put forward by special interests who believe false speech about them was more offensive than false speech about others. There are ample vehicles to punish those whose false speech actually damages others, including claims for libel, perjury and fraud.

“Once again, the Supreme Court has recognized that the marketplace of ideas is the appropriate place to regulate obnoxious and offense speech. While Mr. Alvarez clearly is a habitual liar, we’re pleased the Court resisted the temptation to uphold a content-based restriction on a new category of speech.”

The Court’s opinion is clear that it does not support the lies of people like Alvarez and, in fact, finds such actions “contemptible.”

“The Nation well knows that one of the costs of the First Amendment is that it protects the speech we detest as well as the speech we embrace,” the opinion stated.