“If balloon deflation is dangerous or unsafe we would hope it would be done away from the public and outside of midtown Manhattan.”

—  Mickey H. Osterreicher, General Counsel for National Press Photographers Association, in a letter to the New York Police Department, on NYPD officers’ statements that two photographers could not enter a particular area during their coverage of the Macy’s Thanksgiving Day parade.

“Whenever journalists are arrested/detained for reporting the news, everyone’s freedom is at risk. That is what frightens me the most. #oo”

—  Kristin Hanes, reporter for KGO, on being arrested while covering Occupy Oakland (via Twitter).

“So maybe we allow a certain amount of puffing in political speech as well.” 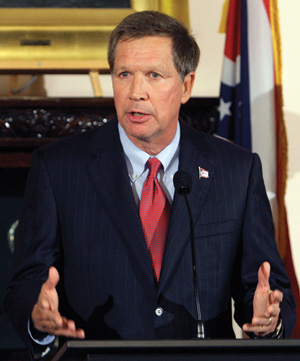 “You should know, I don’t read newspapers in the state of Ohio. Very rarely do I read a newspaper.”

—  Ohio Gov. John Kasich said in a speech delivered in November at the Columbus College of Art and Design.

—  Attorney Seth Waxman, who was representing ABC, at oral argument in FCC v. Fox Broadcasting Co., pointing out nudity in the friezes adorning the walls of the Supreme Court.