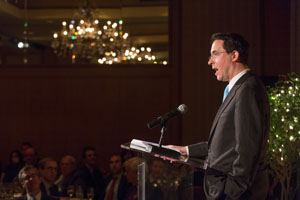 “[The] greater problem for many reporters in this era is not getting access to the courts, but having the resources to actually cover them. The meat and potatoes of reporting on what’s happening in the legal system is achieved not by filing motions, but by actually sending reporters into courts to watch what’s happening. There is a lot of vital news happening in our courts today that is simply not being covered.”

“The principle that court proceedings are public is essential to public confidence. If persons charged with crimes could withhold their identities, the public would not be able to monitor proceedings to observe whether justice has been done and to observe whether certain defendants may have received favored treatment.”

– Maine Superior Court Justice Thomas D. Warren in an order denying a request for a temporary restraining order to prevent disclosure of the names of more than 100 men charged with hiring a prostitute.

“Prisons aren’t country clubs. They’re not there to be visited and looked at. I think we have to make sure they’re secure, and I think the security of the public is paramount when it comes to prisons.”

“If Google, then, relies on the popularity of searches to determine its results, and these searches reflect the speech of countless individuals as measured objectively, can Google possibly be found to have acted with subjective awareness of probable falsity?”

“It’s kind of an obnoxious use of the judicial system.”

“The Internet can be a dangerous place.”

“Do you only do things the Constitution requires and not things good sense condones?”

– U.S. Court of Appeals for the Armed Forces Senior Judge Walter T. Cox III, asking a military prosecutor during oral arguments on a request to unseal documents in the court-martial of Pfc. Bradley Manning why the government cannot post online unclassified documents in the case.

“We don’t have an official secrets act in the United States, as other countries do. Under the First Amendment, freedom of the press, freedom of speech, and freedom of association are more important than protecting secrets.”

– Alan Dershowitz, lawyer for WikiLeaks founder Julian Assange, speaking to SPIEGEL International about what the First Amendment has to say about WikiLeaks.