A still image from the fighting game “Mortal Kombat.” The California bill defined violent video games as those “in which the range of options available to a player includes killing, maiming, dismembering, or sexually assaulting an image of a human being.”

On the final day of its term, the U.S. Supreme Court rejected an attempt to carve out another category of speech from First Amendment protection, striking down a California restriction on the sale or rental of violent video games to minors.

“We have no business passing judgment on the view of the California Legislature that violent video games (or, for that matter, any other forms of speech) corrupt the young or harm their moral development,” Justice Antonin Scalia said for the Court. However, “[e]ven where the protection of children is the object, the constitutional limits on governmental action apply,” Scalia cautioned.

The case, Brown (formerly Schwarzenegger) v. Entertainment Merchants Association, arose out of a challenge to the constitutionality of a California law enacted in 2005 that prohibited the sale or rental of “violent video game[s]” to minors. The law contained a detailed definition of such games, applying to those “in which the range of options available to a player includes killing, maiming, dismembering, or sexually assaulting an image of a human being” if the games also met other criteria reflecting a lack of positive value to minors.

The law also included a labeling requirement on the games, requiring violent video games to be designated as such by including a specific “18” label on the front cover. 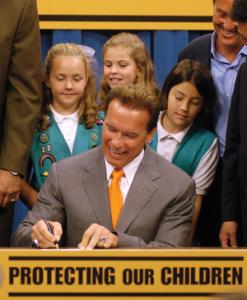 Former California Gov. Arnold Schwarzenegger signed a bill banning the sale of violent video games to minors in 2005. In a 7-2 decision, the Supreme Court ruled the bill unconstitutional.

Before the law could go into effect, the Video Software Dealers Association and the Entertainment Merchants Association challenged it in federal court. A U.S. District judge in California granted the trade groups’ request to enjoin enforcement of the law, concluding that the prohibition on sales and rentals to minors violated the First Amendment. The U.S. Court of Appeals in San Francisco (9th Cir.) affirmed the ruling. The Ninth Circuit also concluded that the labeling requirement was itself unconstitutional because it impermissibly compelled the video game retailers to include a controversial message on the product that was not purely factual.

The U.S. Supreme Court agreed to review the Ninth Circuit’s opinion last year. The case attracted significant attention from the media and legal communities. Interested parties filed more than 30 friend-of-the-court briefs, including one filed by the Reporters Committee for Freedom of the Press on behalf of several news media organizations.

The Reporters Committee’s brief argued that the legislative reaction to violence in video games followed a long pattern of attempts to censor new forms of media, from comic books to motion pictures to rock ‘n’ roll music, and did not justify creating an additional exception to the First Amendment rights.

The Court heard oral arguments in the case last November, but did not issue an opinion until the final day of its term, in late June.

Such a regulatory regime cannot withstand constitutional review, Scalia said. “No doubt a State possesses legitimate power to protect children from harm, but that does not include a free-floating power to restrict the ideas to which children may be exposed,” Scalia said, citing past cases.

Driving home the relevance of the California law to more general principles of free speech, Scalia emphasized the difficulty in limiting First Amendment protections to certain content or topics. “The Free Speech Clause exists principally to protect discourse on public matters, but we have long recognized that it is difficult to distinguish politics from entertainment, and dangerous to try,” Scalia said.

“Grimm’s Fairy Tales, for example, are grim indeed,” Scalia said. “As her just desserts for trying to poison Snow White, the wicked queen is made to dance in red hot slippers ‘till she fell dead on the floor, a sad example of envy and jealousy.’ Cinderella’s evil stepsisters have their eyes pecked out by doves. And Hansel and Gretel (children!) kill their captor by baking her in an oven.”

After determining that the content regulated by the California law was protected speech, the Court turned to analyzing whether such regulations were nonetheless permissible.

Justifying such content-based regulations is an uphill challenge, as such restrictions are considered constitutionally suspect and require demonstrating a “high degree of necessity [the Court has] described as a compelling state interest,” Scalia said. California’s law failed such scrutiny because the state had not demonstrated that the law as written would satisfy a compelling state interest and the law was not sufficiently narrowly drawn.

“As a means of protecting children from portrayals of violence, the legislation is seriously underinclusive, not only because it excludes portrayals other than video games, but also because it permits a parental or avuncular veto,” Scalia said.

“And as a means of assisting concerned parents it is seriously overinclusive because it abridges the First Amendment rights of young people whose parents (and aunts and uncles) think violent video games are a harmless pastime. And the overbreadth in achieving one goal is not cured by the underbreadth in achieving the other.”

The Court’s opinion follows last year’s decision in United States v. Stevens, which struck down a law prohibiting the sale of certain depictions of cruelty to animals. In Stevens, the Court warned against attempts to designate additional topics of speech as not subject to First Amendment protections. The Court reiterated that position here.

“Last Term, in Stevens, we held that new categories of unprotected speech may not be added to the list by a legislature that concludes certain speech is too harmful to be tolerated.” That understanding compelled the Court to reject California’s attempt to regulate violent content to minors, Scalia said. 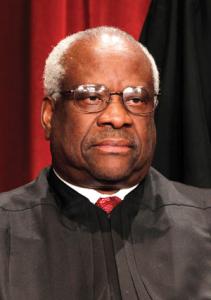 Scalia’s opinion for the Court commanded only a five-justice majority. Justice Samuel Alito, writing for himself and Chief Justice John Roberts Jr., agreed that the law as written was unconstitutional. But Alito said the Court should have decided the case on vagueness grounds only.

Alito “question[ed] the wisdom of the Court’s approach” in striking down the law on broader grounds and said the Court should not have embraced strict scrutiny analysis. He predicted that the effect of such a “sweeping” opinion would be to unnecessarily limit legislative efforts to combat concerns that new technologies are harmful to minors.

“I would not squelch legislative efforts to deal with what is perceived by some to be a significant and developing social problem. If differently framed statutes are enacted by the States or by the Federal Government, we can consider the constitutionality of those laws when cases challenging them are presented to us.”

Alito also questioned the Court’s conclusion that video games are the equivalent of books and literature for First Amendment purposes.

“When all of the characteristics of video games are taken into account, there is certainly a reasonable basis for thinking that the experience of playing a video game may be quite different from the experience of reading a book, listening to a radio broadcast, or viewing a movie. And if this is so, then for at least some minors, the effects of playing violent video games may also be quite different,” Alito said. “The Court acts prematurely in dismissing this possibility out of hand.”

Justices Stephen Breyer and Clarence Thomas wrote individual dissents. Thomas maintained that speech to minors is “excluded” from the First Amendment’s speech protections, based on a historical understanding of the constitutional amendment.

“The practices and beliefs of the founding generation establish that ‘the freedom of speech,’ as originally understood, does not include a right to speak to minors (or a right of minors to access speech) without going through the minors’ parents or guardians,” Thomas said.

Breyer viewed the California law as facially valid. He said the law was no more vague than laws regulating sexual content in expressive materials that the Court had upheld in previous cases. Moreover, although he agreed with the Court majority that the law should be subjected to strict scrutiny review, Breyer said the law could pass such analysis.

California’s Legislature passed a law to combat a societal concern about the effects of violent video games on minors and created a regulation that addressed that concern in a permissible manner, he said.

“Our Constitution cannot succeed in securing the liberties it seeks to protect unless we can raise future generations committed cooperatively to making our system of government work,” Breyer said. “In my view, the First Amendment does not disable government from helping parents make . . . a choice not to have their children buy extremely violent, interactive video games, which they more than reasonably fear pose only the risk of harm to those children.”

The relevance to the news media

Paul Smith, the attorney who argued the case for the video game industry, said that the Court’s decision “strongly reinforced the principle that the Court is not going to create new exceptions to the First Amendment or particular types of controversial content.”

Addressing the relevance of the case to the news media, Smith said: “I don’t know how many times a newspaper article would be so violent that it would have fallen within some exception if [the Court had] created it, but certainly the Court’s overall strong reinforcement of the notion that there are some exceptions, but we are not creating any new ones, is important.”

However, Smith suggested the Court’s emphasis on historical context in defining the First Amendment protections may give some press advocates pause. The defamation protections that the Supreme Court has afforded to the press, for example, may lack the historical background of other rights.

“If you wanted to take a completely originalist view then you could say that New York Times v. Sullivan was kind of created out of whole cloth 150 years later,” Smith said. “So if you wanted to, you could take apart the whole edifice of the Sullivan line of cases to protect the press in defamation [cases].”

Smith said that he does not have a particular reason to believe that Scalia is intent on re-examining the Sullivan line of cases. Nonetheless, “it is true that an originalist view, while helpful in the violence area, would be less helpful I suppose in a defamation case, because, for a long, long time before Sullivan, states were free to punish defamation based on showings a lot less difficult than they have to show now,” Smith said.

Assessing the Court’s views on press freedoms based on recent speech cases remains a challenge, Smith said. “This is a strongly pro-First Amendment Court,” he said. “Whether they are a strong pro-press rights Court I don’t know. We haven’t had a lot of press rights cases recently.”