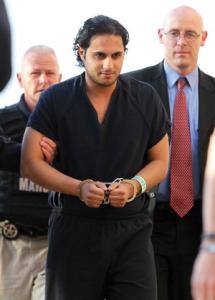 Khalid Aldawsari is escorted to a court appearance. Texas journalist James Clark is representing himself in an effort to overturn a gag order on the parties in U.S. v. Aldawsari. Aldawsari is accused of planning to bomb the home of former U.S. President George W. Bush.

When a U.S. District Court in Texas imposed a gag order in a case involving a Saudi citizen accused of trying to target the home of former President George W. Bush in a bomb attack, journalist James Clark wanted to challenge the ruling.

The trial was scheduled to begin in less than a month and no attorneys agreed to help him pro bono, so Clark realized he had a choice to make.

“My choices were to file a challenge on my own or let it go,” he said. “I didn’t want to let it go.”

So Clark filed a motion to intervene in the case in April and asked the judge to lift the gag order. When the judge denied the request, Clark petitioned the U.S. Court of Appeals in New Orleans (5th Cir.) to overturn the ruling.

The appellate court dismissed the petition on procedural grounds in July, though it left open the possibility of pressing an appeal of the trial court’s denial to Clark’s initial motion by other means. Clark has since appealed a sceond time, and the Fifth Circuit has agreed to expedite his case.

In June, when the court was scheduled to hold a status hearing on the case behind closed doors, Clark filed another motion to intervene and open the proceedings to the public. The judge denied the motion.

What began as a single motion to lift the gag order has turned Clark, an executive producer at television station KCBD in Lubbock, Texas, into a part-time litigator. And while Clark said he has enjoyed representing himself in court, he stopped short of encouraging other journalists to follow in his footsteps.

“It’s a lot of research and a lot of hard work,” he said. “I certainly would not recommend this for someone who is new to the business.”

Researching and writing a legal brief in two weeks

Clark’s legal work began in March when U.S. District Judge Sam Cummings issued a gag order that prevented the parties in U.S. v. Aldawsari from communicating with the news media.

Prosecutors in the case charged Khalid Aldawsari with attempted use of weapons of mass destruction, alleging that Aldawsari made a chemical bomb in Lubbock as part of a plot to blow up several potential locations, including Bush’s house.

When the court issued the gag order, the trial was scheduled to begin in April, Clark said. Clark attempted to get an attorney to help him with the motion, but those who responded said they did not have time to work on the case or could not take it for free.

“I did try to talk to some attorneys, but I didn’t get very far,” he said.

So Clark dug in and started researching how he could represent himself and conduct the legal research necessary to write a brief.

He began by doing online research about what was necessary to file pro se, the legal term for parties who represent themselves.

Clark looked through various legal websites, and sites that listed case names and provided descriptions of the decisions. Overall, Clark said he found the work to be time consuming but somewhat intuitive.

“Once I found one good relevant case, it was easy to find other related cases,” he said.

Clark started writing the first motion while he was researching the law, revising it as he found new cases to add and other arguments to include. The entire process took about two weeks, with Clark using his spare time outside of work to complete the motion.

The court eventually pushed back the trial date, though the gag order remains in place.

The work and process of writing the first brief was new but not altogether unfamiliar, Clark said.

“Every journalism job that I’ve had has required me to read and report on legal documents, so legal terms are not foreign to me,” he said.

What Clark wasn’t prepared for were the procedural rules that govern how to file legal documents with a court, including the types of forms that must be completed and the format the filings must take.

“The technical issues were all new to me,” he said.

The appellate court ruled in July that Clark had used the wrong procedure in attempting to appeal the trial court’s denial of his challenge to the gag order, though it did not decide whether the trial court’s gag order was proper.

“They didn’t rule against me on the merits,” Clark said. “So there will be more research and writing as the fight continues.”

Clark also filed a brief asking the trial judge to open a status conference in the Aldawsari case. The trial court denied the motion after prosecutors and the defense agreed to a scheduling order in the case, making the status conference unnecessary.

Representing himself is not ‘ideal’

Although he has enjoyed researching and writing about the legal issues surrounding access to courts, Clark said other journalists interested in challenging court orders without an attorney should be familiar with how courts work.

“I think this requires a great deal of experience,” Clark said. “I think it’s something that is best done by someone who has reported on the legal system for a few years.”

While reporters may sometimes find themselves standing up in a courtroom to object to closing certain proceedings, it’s rare to find journalists representing themselves in legal filings with a court, said Robert Latham, a Dallas-based media attorney.

Latham, while admitting his own self-interest, said he recommends hiring a lawyer when journalists attempt to challenge an order that limits access to courts.

“I think most people understand that this is what lawyers do and the experience they bring can be helpful and useful,” Latham said.

But at the same time, Latham said he understands and respects that it’s not always possible to hire a lawyer. “I wish him luck,” Latham said of Clark’s efforts.

Clark’s latest appeal of the trial court’s gag order means that he will have more legal work in the future, and, despite feeling confident that he can represent himself, he still believes that having a lawyer would have been the best solution.

“The ideal course of action is to try to get an attorney, perhaps pro bono, to help you,” Clark said. “That’s probably the best thing to do.”