2022 was another successful year for the Reporters Committee for Freedom of the Press — and, more importantly, for the journalists who rely on our free legal services and resources to keep the public informed.

At the local and national levels, Reporters Committee attorneys helped the news media win many legal battles that uncovered previously secret government records. Our advocacy efforts led to increased protections for press freedom. We expanded our support for local news and journalists of color. And we celebrated a longtime client’s Pulitzer Prize for an investigation made possible in part by Reporters Committee attorneys’ pro bono legal support.

Their legal work improved public access to court records and forced local governments to train their employees on their obligations under open records laws. It also pried loose records that fueled investigative stories in the public interest — journalism that revealed new information about pandemic relief funding, exposed a transit agency’s failure to track sexual assault targeting its workers, and explained why federal prosecutors searched the phone of a sitting U.S. Senator.

For some big-picture perspective on the year, it helps to take a look at the numbers. In 2022, Reporters Committee attorneys: 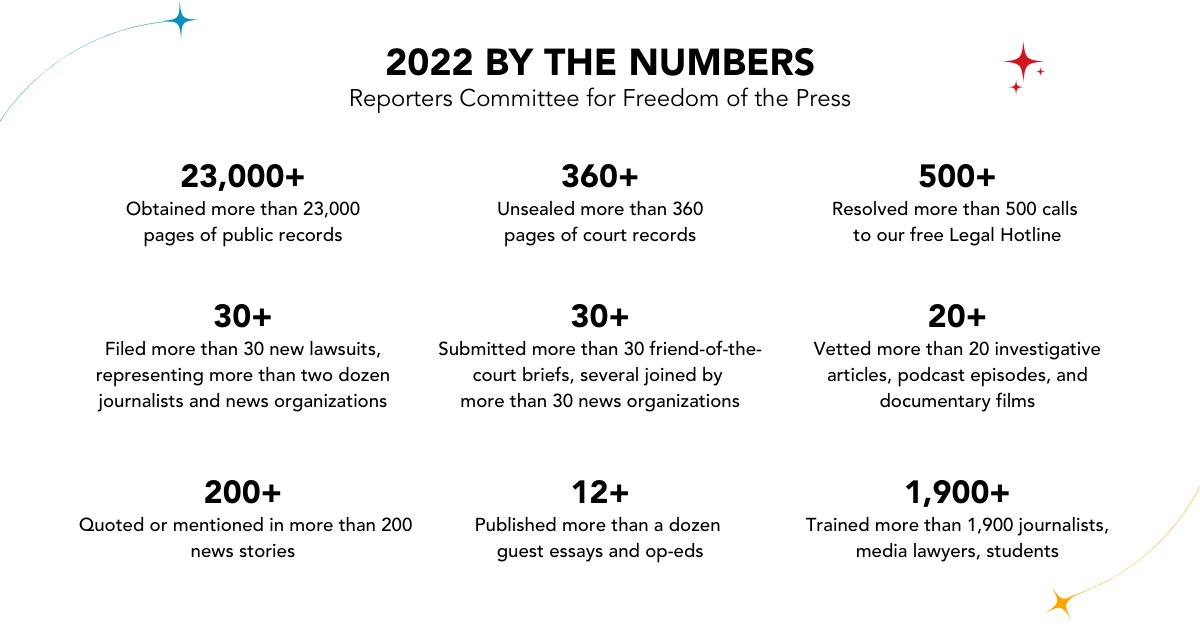 But the numbers tell only part of the story. For a closer look at the Reporters Committee’s year, here’s a recap of the highlights.

In October, the U.S. Department of Justice announced historic changes to its news media guidelines that strengthen protections for journalists.

The most recent changes followed a decade of advocacy efforts by the Reporters Committee and other news media leaders. The updated guidelines expressly prohibit members of the Justice Department from using subpoenas or other investigative tools against journalists who possess and publish classified information obtained in newsgathering, with only narrow exceptions. They also bar efforts to seize records from, or of, journalists engaged in newsgathering more broadly.

“This is a watershed moment,” said Reporters Committee Executive Director Bruce D. Brown, who co-authored a CNN op-ed about the significance of the updated guidelines. “The new policy marks a historic shift in protecting the rights of news organizations reporting on stories of critical public importance.”

The records shed light on the lawmaker’s stock trades around the start of the COVID-19 pandemic and how officials navigated an investigation into a sitting member of Congress. They are the result of a lengthy legal battle to help the public understand the grounds for which the government sought — and obtained — a search warrant for Burr’s phone in May 2020.

In friend-of-the-court briefs, including one filed with the U.S. Supreme Court, the Reporters Committee continued to highlight the First Amendment implications of state laws governing how social media companies moderate content posted on their platforms.

Now that two federal appeals courts have split on social media censorship statutes passed in Texas and Florida, it’s looking increasingly likely that the nation’s highest court could soon be asked to settle the constitutionality of the state laws, a decision that could potentially have huge implications for the news media.

A federal district court in Pennsylvania ruled in favor of Forbes and its editor Thomas Brewster in their effort to access court orders that describe federal investigators’ successful bid to compel a private company to assist in executing an arrest warrant.

The decision came almost two years after Reporters Committee attorneys filed applications to unseal the orders in three separate federal district courts on behalf of the news outlet to help the public better understand the scope of the government’s surveillance powers.

It’s an important win for government transparency — one that we hope will be replicated in a companion case currently before the U.S. Court of Appeals for the Ninth Circuit.

After her historic nomination to the U.S. Supreme Court, our attorneys reviewed then-Judge Ketanji Brown Jackson’s record on issues that are especially important to journalists: everything from libel and FOIA to newsgathering and national security.

In both cases, the state Supreme Court referenced arguments the Reporters Committee made in friend-of-the-court briefs urging the court to make the records public.

“These Supreme Court decisions weave greater transparency and accountability into the tapestry of open government that New Jersey communities collectively construct each time an individual files an open records request, attends a school board meeting or sues the government to enforce the state’s open government laws,” Reporters Committee Staff Attorney Gunita Singh wrote in an op-ed for NJ Spotlight News.

In November, Reporters Committee attorneys settled one of RCFP’s longest-running lawsuits — a Freedom of Information Act case concerning the FBI’s impersonation of an Associated Press editor in 2007.

Through years of litigation, the Reporters Committee and the AP pried loose records that, among other things, showed that the FBI failed to follow its own rules governing undercover operations involving impersonation of the news media.

The litigation also resulted in an important FOIA ruling that set a high bar for the government to withhold records under FOIA’s “foreseeable harm” standard.

The Reporters Committee repeatedly spoke out against the Los Angeles County sheriff after he displayed the photo of a Los Angeles Times reporter and listed her as one of three subjects of a criminal investigation into the disclosure of a video showing a sheriff’s deputy kneeling on the head of a handcuffed inmate.

In an appearance on “The Rachel Maddow Show,” RCFP Deputy Executive Director and Legal Director Katie Townsend stressed that the journalist’s reporting is constitutionally protected and that “the public should be outraged” by the sheriff’s attempt to silence her coverage. And in a letter to the sheriff, the Reporters Committee condemned his threat to investigate the journalist and urged him to take steps to protect the basic rights of reporters.

In a landmark decision that will increase government transparency across Indiana, the state Supreme Court held that agencies must provide specific facts explaining why a public employee is suspended, fired, or otherwise disciplined.

The ruling was the culmination of a three-and-a-half-year legal battle Reporters Committee attorneys successfully waged on behalf of Indiana’s WTHR-TV, which sued a local school district for information about the suspension of a high school teacher and football coach.

“This isn’t just a win for WTHR,” Reporters Committee Senior Staff Attorney Adam Marshall told WTHR after the ruling. “This is a win for everyone who lives in the state of Indiana.”

In a huge victory for data journalists, a federal appeals court ruled that “scraping” a publicly available website doesn’t violate the federal anti-hacking law — an argument Reporters Committee attorneys have made in case after case after case.

The Reporters Committee welcomed supporters back to New York City to celebrate the 2022 Freedom of the Press Awards! The successful event gave us the chance to recognize the important achievements of leaders in the news media and legal fields — and raise funds so that the Reporters Committee can continue to support and defend the free press for years to come.

2022 marked an important milestone in the Reporters Committee’s support for local news. In October, we announced an enhanced partnership with Microsoft Corp., the John S. and James L. Knight Foundation, and Davis Wright Tremaine to expand a program to provide local journalists no-cost legal help with pre-publication review and public records access.

The expansion of the Protecting Journalists Pro Bono Program (ProJourn) follows a successful pilot phase and landscape study demonstrating the critical need for increased legal support for local journalism, as well as a $1.3 million investment from the Knight Foundation.

The Reporters Committee also continued to build on the successful first two years of our Local Legal Initiative, which has supported important investigative and enterprise journalism in Colorado, Oklahoma, Oregon, Pennsylvania, and Tennessee.

Here are highlights from each of the five Local legal Initiative states:

In Colorado, the Reporters Committee, joined by a coalition of nine local news organizations, supported The Denver Gazette in its successful fight against an unconstitutional prior restraint that barred the newspaper from reporting on records a court staffer inadvertently disclosed about a criminal case involving a police officer charged in connection with the 2019 death of 23-year-old Elijah McClain. 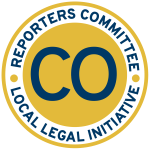 Rachael Johnson, the Reporters Committee’s Local Legal Initiative attorney for Colorado, also assisted local news outlets in their efforts to obtain government records, including the recording and meeting minutes of an unlawful executive session related to the censure of a city council member.

And on behalf of the editor of Colorado’s Crested Butte News, she appealed a district court decision holding that a library could shield the names of people who seek to ban books from a public library.

In Oklahoma, Local Legal Initiative Attorney Kathryn E. Gardner sued a state agency on behalf of Oklahoma Watch to obtain records about applications for federal COVID-19 relief funds. Using records obtained through the litigation, the nonprofit news outlet published an investigation revealing which agencies, businesses, and nonprofits requested billions of dollars in pandemic relief aid and what they wanted to fund. 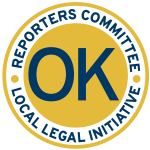 Gardner also continued to provide critical support to journalists covering issues impacting Indigenous communities in Oklahoma. She represented the Osage News in its successful effort to access records of payments made by the Osage Nation Treasury Department to a Tulsa-based law firm.

And more recently, she filed a public records lawsuit against Oklahoma’s governor and attorney general on behalf of journalist and author Rebecca Nagle. The lawsuit, which is ongoing, seeks emails and other communications between current and former public officials related to a historic U.S. Supreme Court decision concerning Native American land and Indigenous rights.

In Oregon, Local Legal Initiative Attorney Ellen Osoinach helped a freelance journalist fend off a subpoena forcing her to testify about one of her sources. And she helped The Oregonian obtain records about how much water Google uses to cool its data centers in the city of the Dalles. 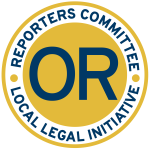 Osoinach and the Reporters Committee also celebrated the news that a judge dismissed all charges against April Fonseca Ehrlich — an outcome RCFP advocated for after the public radio journalist was arrested in 2020 while covering the police removal of houseless campers from a public park.

And in a high-profile gender-discrimination case, a federal judge in Oregon ordered Nike to unseal court records that shielded information about Nike’s pay practices. The order came after Osoinach intervened on behalf of three news organizations to bring transparency to the class action case brought by female Nike employees. 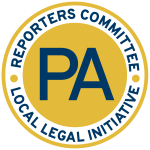 In many cases, newsrooms represented by Burke turned legal victories into investigative stories. For example, the nonprofit Billy Penn used records obtained through litigation to expose the Philadelphia’s public transit agency’s failure to track incidents of sexual assault and harassment targeting its employees. And the Philadelphia Inquirer revealed how executives of Pennsylvania’s largest public pension fund pushed back against a whistleblower who raised serious concerns about the fund’s finances.

In Tennessee, state lawmakers passed a bill strengthening campaign finance and ethics rules — a move that appeared to be an outgrowth of an open meetings lawsuit in which Local Legal Initiative Attorney Paul McAdoo represented a group of Tennessee news media and open government organizations. 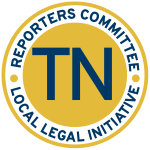 McAdoo continued to provide legal support for the law enforcement accountability reporting of investigative journalist Marc Perrusquia. In April, he sued the city of Memphis for access to records documenting how the Memphis Police Department supports officers who have been subject to disciplinary proceedings. And in June, he sued the Shelby County sheriff for access to video footage capturing a Memphis police officer’s use of excessive force.

Through the Reporters Committee’s free Legal Hotline, McAdoo also helped the nonprofit Nashville Banner obtain billing records that revealed why taxpayers paid nearly $900,000 for a local election commission to litigate an anti-tax charter amendment that never even made it onto the ballot.