Ignited by the May 26 police killing of George Floyd, the 2020 Black Lives Matter protests have prompted conversations about systemic racism and police brutality in newspaper columns, in virtual classrooms and around dinner tables.

They have also marked a tumultuous moment for press freedom in the U.S., as journalists across the country have faced a continuous onslaught of attacks and arrests.

In Minneapolis, Minnesota, for example, police shot photojournalist Linda Tirado in the face with a foam bullet that broke through her protective goggles, leaving the freelancer permanently blind in her left eye. In Los Angeles, a police officer shoved photojournalist Barbara Davidson to the ground, causing her to hit her head on a fire hydrant. And in New York City, police repeatedly hit Tyler Blint-Welsh of The Wall Street Journal in the face, pushing him to the ground, even though he was wearing a visible press credential issued by the NYPD.

Even as protests have quieted or received less attention in parts of the country after peaking in June, demonstrations have continued in places like Portland, Oregon, where journalists have been targeted by police while covering law enforcement clashes with protesters. In late July, for example, a 17-year-old Portland reporter was tear-gassed and shoved by officers as she covered the protests for her high school newspaper.

Law enforcement officers are responsible for most of the attacks, according to the U.S. Press Freedom Tracker, an organization that documents assaults and arrests of journalists. But some journalists have endured violence from protesters and other members of the public.

As of Sept. 1, the Tracker has confirmed 238 press freedom violations in 2020 — including physical assaults, arrests, and equipment searches and seizures — more than three quarters of which occurred while journalists were documenting the Black Lives Matter protests. That’s compared to 152 total press freedom violations in 2019, 132 in 2018 and 144 in 2017, according to the Press Freedom Tracker.

The attacks against journalists covering the 2020 Black Lives Matter protests have proved to be an inflection point for violence against the American media, worrying press freedom advocates and raising questions about future protections for U.S. journalists covering political protests. The repeated assaults and arrests of journalists have also demonstrated the demand for legal resources and services provided by the Reporters Committee for Freedom of the Press, whose attorneys have supported journalists covering the demonstrations since protesters first hit the streets in late May.

“These attacks not only endanger our free press,” Reporters Committee Executive Director Bruce Brown said in a statement during the first weekend of protests, “but also threaten our democracy and the essential role that journalists play in safeguarding constitutional rights.” 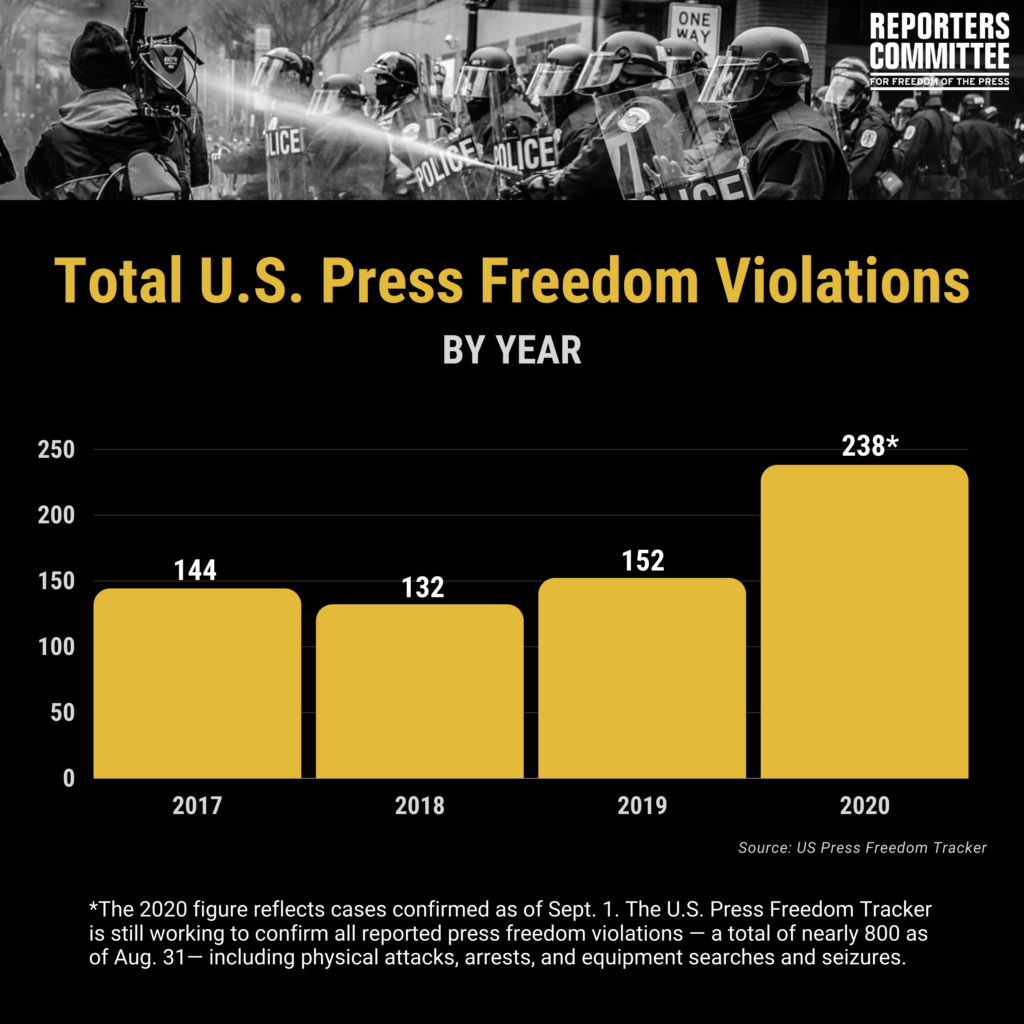 While official data about the 2020 press freedom violations remains incomplete, as the Press Freedom Tracker works to confirm incidents that journalists have reported to the organization, existing numbers already paint a stunning portrait of targeted attacks on members of the news media. Reported press freedom violations endured by journalists during the 2020 Black Lives Matter protests alone outpace the annual rates reported by the Press Freedom Tracker.

The Press Freedom Tracker has also confirmed 60 arrests of journalists in 2020. This is more than five times the number of reporters arrested in the U.S. in 2019 — nine — and more than four times the amount in 2018, 11. Much like this summer, 2017 saw a spike in arrests of journalists amid widespread protests, with 38 reporters detained by law enforcement. Fourteen of these journalists were arrested while covering a surge of demonstrations in St. Louis, Missouri, protesting the acquittal of a white police officer, Jason Stockley, who shot and killed Anthony Lamar Smith, a Black man. Several other reporters arrested in 2017 were covering protests over the Dakota Access Pipeline at the Standing Rock Indian Reservation.

So far in 2020, the Press Freedom Tracker has documented 10 incidents in which police have searched or seized journalists’ equipment. Equipment searches and seizures are threats to press freedom with insidious, sweeping consequences: These searches can threaten the safety of confidential sources and expose sensitive materials. They can also undermine the separation between reporters and government actors that is integral to a free press, and risk turning the news media into an “investigative arm” of the government.

For example, in late May, police seized the camera equipment belonging to a photojournalist, Christopher Rusanowsky, who was covering the Black Lives Matter demonstrations in Dallas. In late June, the Reporters Committee filed a friend-of-the-court brief, asking a Washington state court to quash a subpoena that the Seattle Police Department issued to five local news organizations, requiring them to turn over photos and video footage of the protests. In July, a judge ruled that the news organizations must comply with the subpoena, but the Washington Supreme Court granted an emergency stay of that decision until it has a chance to decide the appeal on the merits.

As protests mounted in the last week of May, Reporters Committee staff provided legal help and resources to reporters in need of assistance. During the first week in June, the organization’s Legal Hotline received more calls than it did in any week since it began recording this data in 2013. The Reporters Committee fielded hotline inquiries from journalists in 16 different states, and two-thirds of the inquiries during that week related to protest coverage.

The calls differed in their levels of urgency, said Bill Powell, a lawyer and former Reporters Committee fellow who worked the hotline as the protests began. Some journalists called in to seek advice on covering protests safely before heading to demonstrations. Others called in crisis after facing tear gas, rubber bullet shots and even arrests.

To help journalists documenting the widespread demonstrations, the Reporters Committee widely distributed tips for covering protests. The tip sheet advises precautionary steps — like writing a lawyer’s number down on your arm, so no reporter has to unlock their phone in front of an officer to seek legal guidance — and also urges reporters not to consent to a police search of their equipment.

The Reporters Committee also sent letters to government leaders, including law enforcement officials, denouncing the attacks on the press in New York, California, Minnesota and Denver, Colorado, places where attacks on the media proved especially disturbing. Each letter was tailored to the specific concerns raised by press freedom violations in the region and leaders’ responses to those threats.

But a common set of concerns coursed through the letters. The Reporters Committee urged officials to ensure that journalists were exempt from any curfew orders imposed because of the protests; to educate police about the clearly established protections the First Amendment affords reporters; and to discipline any law enforcement officers who undercut protections for the press.

“The challenges that officers face in policing during times of civil protest do not supersede any of the rights guaranteed by the First Amendment, and moments of crisis demand that we protect the bedrock American ideal of a free press even more zealously,” the Reporters Committee emphasized to New York officials in a letter co-signed by 126 media organizations.

In late July, the Reporters Committee backed SB 629, a California bill that would protect journalists from attacks at protests, affording them explicit protections against law enforcement officers who, by means of assault, obstruction or arrest, interfere with the reporting process. The bill is still under consideration by the California General Assembly.

In New York, the Reporters Committee urged New York lawmakers to repeal Section 50-a of the state’s Civil Rights Law, a provision that kept police misconduct records shrouded in secrecy. Days after the Reporters Committee submitted its letter to lawmakers, the latest in a series of advocacy efforts to fight the secrecy provision, state legislators repealed Section 50-a.

When police and fire unions in New York sued in response to the repeal, the Reporters Committee supported New York City in successfully opposing the unions’ request for a preliminary injunction blocking release of the records, and similarly opposed a requested preliminary injunction in Buffalo, New York, that has yet to be decided.

“Ensuring timely, meaningful, public access to the records at issue here is precisely what the New York Legislature intended when it repealed Section 50-a,” the Reporters Committee wrote in a friend-of-the-court brief filed with the U.S. District Court for the Southern District of New York. “And when journalists are able to scrutinize such records, which speak to the conduct of law enforcement personnel, they can tell stories that have a powerful impact on communities.”

The attacks against journalists covering the Black Lives Matter protests have followed four years of anti-media rhetoric, pervasive throughout the country but spearheaded by President Donald Trump and his administration. According to a January 2020 Pew study, Americans are increasingly polarized in how they view the credibility of mainstream news outlets. Americans’ trust in the media, according to a September 2019 Gallup poll, has declined, especially among Republicans. Now, some advocates worry that distrust, disparagement and disdain of the media has manifested itself in the form of physical violence.

“These incidents do not comport with the sort of standards that we should have for how journalists are treated in our society,” Margaret Sullivan, the media columnist at The Washington Post, told the Reporters Committee. Sullivan said worries about a “dehumanizing” effect that comes from the president’s decision to label not only news articles, but journalists themselves, “fake news.”

Sullivan said she is concerned that the effects of Trump’s verbal attacks against journalists and news organizations will have a lasting impact. To begin to course-correct for these shifting views against the press, she argues, leaders at all levels of government, including the president of the United States, must clearly affirm the role of the free press in a democratic society.

“That message needs to be repeated and fortified,” she said.

Reporters Committee Staff Attorney Sarah Matthews said she worries that as animosity toward journalists has grown, we have seen not only increasing physical attacks and arrests of journalists but also an increase in legal threats.

Between 2017 and 2019, the number of subpoenas reported to the Press Freedom Tracker increased each year, from eight in 2017 to 25 in 2018 and 27 in 2019. Although it is difficult to ascertain trends because subpoenas are notoriously underreported, the circumstances in several of the subpoena cases reported in 2019 suggested that they may have been issued to harass or retaliate against journalists in response to critical reporting or the filing of court access or public records lawsuits.

In addition to physical and legal threats against reporters, Sullivan emphasized, the economic crisis borne from the coronavirus pandemic — and the already-sorry financial state of local journalism — mean that many journalists have had to cover the worst public health crisis in a century and transformative protests demanding racial justice all under the looming threat of furloughs and layoffs.

“It’s harder now to be a journalist than it’s been in recent years,” she said. “We do have to have a really tough skin and we have to carry on, but at the same time, it’s important to understand that there are some larger forces at play here, and we try to counteract them in any way we can.”

The Reporters Committee regularly files friend-of-the-court briefs and its attorneys represent journalists and news organizations pro bono in court cases that involve First Amendment freedoms, the newsgathering rights of journalists and access to public information. Stay up-to-date on our work by signing up for our monthly newsletter and following us on Twitter or Instagram.